Should classic books be sacred? And, if you do choose to revamp or serialise a classic, how should you go about it?

Both Kate Saunders and Holly Webb have taken on children's classics. Webb's novel Return to the Secret Garden (following on from Frances Hodgson Burnett's 1910 novel The Secret Garden) sees a character return to the secret garden during the evacuation of the Second World War, stumbling upon Mary's diaries and going herself in hunt of this hidden space. Saunders also chose to reset a children's classic during wartime, this time continuing the journey of 5 Children and It's lead characters during the First World War, adding a character of her own in 5 Children on the Western Front.

Literature seems to be a tricky medium for this type of serialisation. While we are used to classic films and TV shows being remade, it is a little more contentious when it happens to books. Perhaps this is because it simply is not done so frequently.

Both authors spoke at Bath Children's Literature Festival this weekend, and both were in agreement that far from this being a sacrilege, it is a way of keeping stories alive and of revisiting classic characters. It was an enormous interest in - and love for - these characters that first sparked their interest in taking on these stories, although interestingly, Webb mentioned that she might not be able to do this with all books, feeling Little Women to be a step too far.

So, what makes an author decide to develop an already known and loved story? The war link between both books was a deciding factor, as the authors felt that the war allowed for a reworking of the story, where the message would be slightly different and the final book wouldn't be a revamping of sorts, but rather a vessel for a new direction and message. Both original books were set during the Edwardian 'Golden Age of childhood', before the grim reality of war was a factor in any of these young characters' lives. Realistically, these characters would have experienced the quite brutal shift shortly after the books were set, and this provided plenty of food for thought for the writers to work with.

Both authors read a passage from their novels at the festival, and it was interesting that both focussed on an area of discovery, that had previously been created in intricate detail by the original authors. Webb read the moment that her new character discovers the secret garden, feeling her way through the ivy that surrounds the walls and entering the garden, now in a new state of upkeep. Saunders shared the moment that her lead characters (The Lamb from Five Children and It, and new character, younger sister Edie) come across the Psammead. The balance between honouring the original and creating a personal stamp is surely one of the most difficult in a process such as this. Should the writer ape the language of the first, or form their own style?

Both books have had good receptions since their release, though as a fan of both originals I haven't approached either. Honestly, my first thought upon seeing that the books had been released was that this was, indeed, sacrilege. But, hearing both authors speak it seemed to make a lot of sense that these works had been continued, with love and care for the original sources.

Legally, 75 years after a book has been published it is open to such changes without discussions around copyright. Culturally, you wonder how much time it takes to accept new versions. But, considering the rate at which we are consuming our way through film and TV remakes, perhaps we should be a little more open to our authors reworking the classics.

This was a one off event at Bath Children's Literature Festival. The festival runs until Sunday 4th October, visit here for a full schedule of events. 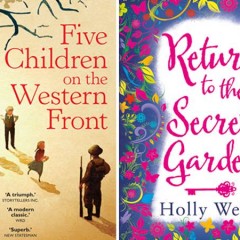 Should classic books be sacred? And, if you do choose to revamp or serialise a classic, how should you go about it?