Harrogate is a play that slowly gets under your skin until, before you know it, you feel you need a good scrub to get it all out. Brilliant, but utterly twisted.

Premiering at the festival over the last week, Harrogate is one of the plays at Hightide that has gathered the biggest buzz. Walking around the town between venues you hear people asking each other if there are still tickets available for showings and on the night that I visited the benches were filled, hip to hip with an expectant crowd. There's been rather a lot in the press about it, mostly very good, all a little mind-blown.

Worthy of mind-blowing, this play is. The sense of intensity, that never drops throughout the play, is impressed before the crowd even enter the stage area (in this case within the beautiful farmhouse setting of the Pumphouse, accessible via a winding country lane), as the stewards issue warnings of strobe lighting and strong language. The seating itself offers the view more frequently offered by a catwalk show than a theatre stage, with audience members lining three sides of a long rectangular stage in two benched rows, so close together than knees touch either the back of the bench in front or else the stage. The brilliant white stage sits a little above the audience and is meticulously set with a block shaped table, two chairs, a door and some coat hangers arranged in perfect alignment. This is clearly a living area, but one, you imagine of a certain type of personality. It looks half modern flat, half clinic.

The entire play is performed by two actors, a male who inhabits the same role throughout and a female character who takes on the role of various women in his life. There is a big secret that drags the male character down throughout this play, that would be inappropriate to reveal here. This secret is incredibly well drawn out. Something that began as an uncomfortable and toe curling hint at the very beginning — very subtly drawn through body language — winds its way through the play, a revolting and off-putting element that you can't quite settle on, or simply don't want to, until the end. So well played is this secret and so well formed this 'monster' of a character, that I found myself repulsed by the male lead even as he took his bows. He inhabits this role, this secret and this taboo so well that it's impossible to see him any other way.

The various characters in the play find themselves repulsed in their own way by this secret, some to a greater and lesser extent. Harrogate however is a play that really is about the wider world; how do the audience feel about this secret? How would society feel about this secret? It is a very relevant question right now, and my own repulsion post-play provided plenty of food for thought after the actors had left the stage.

What this secret is, I wouldn't want to say. But it is certainly worth heading to a showing of Harrogate to find out. 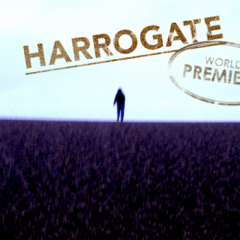 Harrogate is a play that slowly gets under your skin until, before you know it, you feel you need a good scrub to get it all out. Brilliant, but utterly twisted.