A group of writers are commissioned to aid with the staging of the 1969 moon landing.

The moon landing is poignant and generally well-accepted piece of history, this show turns that on it's head. It's 1969, sexism and racism is raging within many parts of the world and Giant Leap captures this prejudice commendably. Well acted the troupe of comedians made use of a range of prop and costumes to enhance their performance and distinguish between roles.

Staying in character throughout, whilst maintaining a convincing American accent was impressive, however I felt much of the wit plateaued. It was disappointing how the humour was lost despite the good theatre, with one audience member even nodding off. Now, I wouldn't say that it was deserving of that but it still wasn't the drollest of shows. The content was good and I could see where the humour was supposed to be, but to me it did fall flat.

To close, I would suggest that whilst having a good theatrical framework, with a group of well trained actors Giant Leap struggled to maintain the fast pace of the comedy world at the fringe.

Unusual and quirky but I just didn't get it… 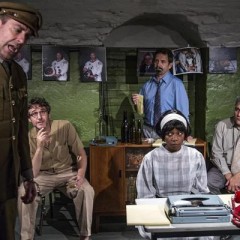 A group of writers are commissioned to aid with the staging of the 1969 moon landing.