Who would've thought it, rap and science?

Baba Brinkmen has previously released various albums on contentious issues such as religion and evolution and now he's back at the fringe with his show concerning climate change. A seemingly incredibly well informed rapper with an insane lyrical flow storms the stage, discussing rising sea levels, population control and extinction. Not into science? Don't be put off yet, Brinkman politicises the art of hip-hop engaging the audience's own views, as they are interwoven, making each person's experience different.

Splitting up each piece with images and other on screen visual aids, Brinkman is on it right from the word go. He impressively raps throughout the show, keeping his rhymes on point. The capitalisation on the climate is a big issue raised, as is the hypocrisy of some people when considering their 'carbon footprint', despite still consuming fossil fuels. He is unafraid to admit to his own guilt regarding these problems, having jetted off around the world due to his career.

The expectation of our behaviour if such an apocalyptic event was to occur is an interesting turn as Brinkman plays devils advocate and provokes the audience. Provocation is a big part to the performance, with there being a live Q&A at the end.

Rap guide to Climate Chaos encompasses many themes too many are afraid to discuss, a must see for any hip-hop fan, science geek, or multi-genre fanatic. 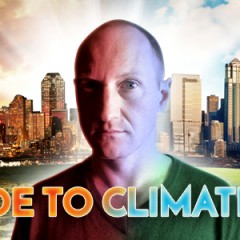 Who would've thought it, rap and science?