Many arts festivals overlook the comedy form. With an expectant crowd, its one of the most difficult to get right.

Normally I find Alan Davies really funny but today I found him a little too mysoginistic and also the pace seemed to be really slow and stretched out. His stories seemed a little long winded and I found myself losing concentration during several of his jokes. However the huge crowd that Davies pulled in more than enough spoke for how good he is as a comedian, I just didn't really connect with the material on this occassion.

I hadn't heard of Angela before but by the end of the set I felt I knew her. She really made me laugh with her jokes about being a woman, comments on life and her own experiences. She was a really lively character and a brilliant comedian. Some of the crowd's response was a bit lacklustre but I was laughing my head off the whole time!

Matt Forde's comedy centred around witty political observations and the current political debate. It was on point, completely current and frankly hilarious. The audience loved him and his assasination of the Conservative and Labour parties was keeping up with the current mood.

This was my favourite comedy act of the day: watching Russell prance about on stage was enough to make me laugh in itself but his jokes were so funny. I really enjoy watching people who are enjoying being on stage and loving what they are doing and Russell Kane certainly does. The crowd went insane and definitely received the biggest response from any of the other acts. Kane's use of crowd participation and improvisation was brilliant and well timed and his jokes about young people compared with the older generation resonated with everyone in the audience who were made up of the very young right up to the very old.

The points that Elliot Steel made in his jokes were very funny but the delivery of those jokes fell a bit flat. I felt like he lost some of the audience as they were very weak in their response with only a few lone cheers of appreciation. Having said that, Steel is just starting out and I do think he did a very good job. His jokes about his own experiences resonated well with today's youth but perhaps his audience was majoritively a little too old.

As usual, Jon's jokes centred around his geeky socially awkward persona as he revealed his love for avoiding socialising, his odd relationship with his girlfriend and his favourite hobby: tidying. They were funny and the packed arena burst with laughter and appreciation. It felt like he bared all on stage and was a very earnest performance. In return the audience connected to his material extremely enthusiastically. 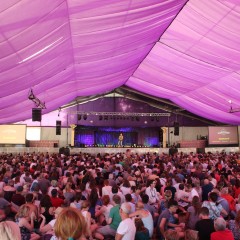 Many arts festivals overlook the comedy form. With an expectant crowd, its one of the most difficult to get right.