What exactly is manliness today? And most importantly, how does society shape male behaviour?

Frantic Assembly's Ignition Company addressed both questions, in an energetic, fun and occasionally touching dance theatre piece. 'Man Up' is performed by a group of male actors and dancers, all of different shapes and sizes. This is kind of the point. The performance began with all men - or boys? - standing in a straight line as a loud voice projected from the walls. 'Line up in size order', 'line up in order of strength', 'line up in order of bravery' and so on. These one liners set the scene for a performance that was all about our ideas of masculinity, and the notion of 'manning up'. It's an interesting concept to look at right now. The feminist debate is so scorching hot that we're well aware of the social pressures that women feel in terms of body image, feminine cliches and so on. A very valid argument, but what about the boys? While the various men's rights groups that have sprung up in the last year or so in backlash to a growing feminist line on social media are causing frustration amongst feminist groups, the questions raised in this performance were very touching. Why can't men cry? Why isn't male affection encouraged between friends? The questions weren't presented in an aggressive way, and much of the content was humourous, bringing up key questions in an entertaining atmosphere. What I found most interesting wasn't the gender divide here, but the man/boy divide. While crying and softness are typically thought of as feminine traits, it was actually the element of being forced to grow from boy into man that was the most significant here. There was a boyish embarrassment about many of the outbursts of feeling, the monologues performed with a look to the floor and a sheepish pause. The point at which a boy has to be seen as strong and capable was raised, as well as the fact that many men in their early twenties don't really see themselves as men. One anecdote about a lady in Macdonalds referring to one of the performers as a man was particularly touching and funny - he hadn't realised yet himself that this was how the world saw him and it took a stranger in Macdonalds to point it out. In between the monologues and recorded voices that delivered these messages was a great amount of physical theatre that rounded this performance well. It allowed a lighter side to the conversation and illustrated many of the points better than words ever could. The men reacted physically to one another, sometimes argy-bargying on stage, half dance, half fight, at other times floating serenely over each other's bodies, appearing as one mass of flesh. This was tender, rough, fun, serious - everything a man in the modern world should have the freedom to be. The dance also really played up to the boyish aspect. There was a playground kind of tussle that seemed like the natural form of masculinity that happens in youth, before work and adult life delivers the demand - be a man. The music alongside this was booming, also very funny and well used. Different performers were given different snippets of song to dance to, some love song causing embarrassed giggles around the group, rock songs leading to chest beating and fist pumping, one performer constantly plagued with a stripper anthem everytime he came on stage, slinking away in embarrassment. The timing was perfect, all of the performers playing up to their particular quirks and personalities. All in all this was a very interesting look at masculinity in the modern age, that didn't lecture, but instead put forward a set of questions, and a suggestion of another way. 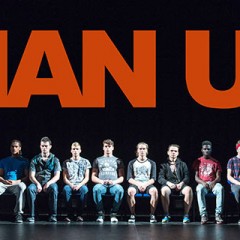 What exactly is manliness today? And most importantly, how does society shape male behaviour?