Sasha Ellen does not shy away from the uncomfortable in her one hour show about misogyny, stereotypes, geeks, women, men, and all things creepy.

Ellen discusses the dichotomy of creeps and geeks, and of fearful women and cautious men. This is no place for subtlety, as her humour is bold and loud.

As a self-proclaimed geek herself, Ellen briefly jokes about the "virgin geek" stereotype, before focusing mainly on the "creep" aspect of the show. There are two sides to the story that she finds within the story of creeps: men who are feared simply for walking down a street; and women who  - understandably - have a deep set of fears which activate when a man walks down a dark street behind them. Her comedy is broken up by a more serious three minute piece, where she articulates an incident which occurred to her in an Uber. She reaches for that emotion that many women have felt; that inner panic when your driver takes a wrong turn, even if the situation turns out to be completely innocent! It's dark, it's a little uncomfortable, but it is also honest, and scarily common. 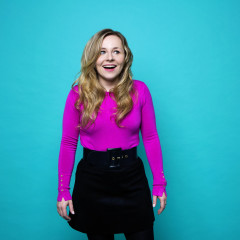 Sasha Ellen does not shy away from the uncomfortable in her one hour show about misogyny, stereotypes, geeks, women, men, and all things creepy.