When a classic has been done again and again, it’s hard to make it unique. However, that wasn’t the case for Flabbergast Theatre. Lending physical theatre to Shakespeare works so well, and the cast of this Tragedy of Macbeth have proved that once again.

With stellar performances from Macbeth, and the three witches, the cast brought their own unique take on the characters we know so well and in a captivating display. The chemistry between the cast was palpable, and they are a very talented ensemble of actors, who each brought something memorable to their part.

However, as charming as it was for one of the characters – I’m assuming the clown – to call his Nan mid-performance and make us all sing happy birthday, that might have been better saved for the end, as it really took me out of the performance and broke that captivating spell I was under.

I also wasn’t a fan of the cast coming into the audience because I didn’t see the need. Like the impromptu sing along, it disrupted what was happening on stage and again, took me out of the intensity of the performance.

There isn’t much fun in Macbeth, but the cast did manage to bring some. Throwing out party hats to the audience, and some funny one-liners delivered in Shakespearean, the translation was not lost.

The set and costumes were great, stripped back and adding to the overall minimalist aesthetic that this production of Macbeth was utilising very well.

You can watch The Tragedy of Macbeth at Assembly Roxy daily at 12:00 pm. 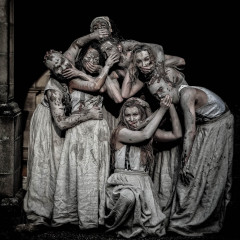 Flabbergast Theatre: The Tragedy of Macbeth