“Can you imagine living in a world with no arts and culture? It would be like living in Portsmouth.”

As someone who has actually lived in Portsmouth, I can attest to Jess’s accuracy there.

It’s sometime in the future, the world is ending in one hour and Jess Robinson has a job to do. After humankind destroyed the planet with its incompetence and refusal to take the climate crisis seriously, Jess has been tasked with saving the world’s arts and culture. Instead of following the very simple instructions she was given by none other than Olivia Coleman, she accidentally breaks the first memory stick and spills wine on the other. Jess has just erased every notable piece or art and culture in our world's history. Except for Black culture. As Jess explained, Black culture has multiple backups because the Kardashians' keep trying to steal it. Clearly there is only one solution to this travesty: remake all the world's arts and culture in one hour using her one and only skill: impressions.

The only issue is, Jess is a little more Love Island than Blue Planet, more Spice Girls than Beethoven and more Natalie Cassidy than Dame Judi Dench. Is that about to stop her? Absolutely not. Can she do it? I think you already know the answer to that but it was a bloody riot watching her try.

Legacy is a ridiculous concept with absolutely brilliant execution. From deep fakes of Olivia Coleman – or was it High Priestess Baronet Pirate Coleman by the end?– to absolute nail on the head depictions of Gal Gadot, Britney Spears, Liz Truss and the like, Jess Robinson put on a show to behold.

Being forced to watch a scene of Love Island with a spot on David Attenborough impression wasn’t what those of us at Pleasance Above knew we needed on a Saturday night, it’s certainly not something we are likely to forget anytime soon.

As Jess said, she’s just “a woman doing the voice of a man and being paid 70% less.”

Legacy is all about embracing the little things in life that bring you joy. A simple concept, but it’s often one we forget to embrace. Life moves fast and devastation around us moves even faster. Jess knows this and she doesn’t take the stage with any other intention than to entertain you for an hour with material she hopes will last longer than the walk to your next show.

The best thing about Legacy has to be Jess’s voice. Why this woman is not commanding the stage on the West End is beyond me. Not that having your own show at the fringe isn’t impressive, but I’m certain Jess could summon the Kraken or rebuild the Titanic with that voice.

All in all, Legacy is a great escape into a world of Jess’s own making, filled with celebrities, great boiler suits and the ghost of Jess’s mum? (at least I think it was her ghost). If the world was to end in an hour, I’d want to be sitting next to Jess on the space shuttle because, if anyone can take your mind off the end of the world, Jess is the only person for the job.

Jess is performing Legacy nightly at Pleasance Above at 21:20. 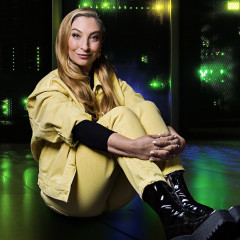 “Can you imagine living in a world with no arts and culture? It would be like living in Portsmouth.”