“At the end of the day, it is the evening”

The Komedia was blessed with a stroke of good fortune, a belter of a performance from a drag duo of dreams. I joined a lively crowd of unassuming drag admirers and the friends they brought with them, assimilating myself with a warm and inviting atmosphere led by seasoned triple threats, and a fortune teller’s booth.

The graceful redhead Lesley Ann took to the keys with admirable ease, tinkling the ivories throughout the performance without missing a beat (or a punchline). Their aura was at once animated and self-assured, a seamless and sequined half of the act. Séayoncé was an exceptional significant other, wielding a rich and melodious vocal tone lamenting a series of spooky tales and ruminations.

It was a two act treat filled to the brim with razor sharp one-liners and astutely funny lyrics. The shuffle of anxiety made itself known when she called for the lights to go up, an inevitable phase of finding the keenest of audience members ready for some stage time. It was as risqué as it was witty, with Séayoncé facilitating the search for a sugar parent for a lucky individual named Liv. Tasked with selecting three “rich looking people” from the crowd, Liv threw caution to the wind and brought three bashful members of the bourgeois to the stage. “The rich tend to stick together” she asserted, perhaps, on reflection, an appropriate observation.

It turned from silly to downright hilarious, with an interlude of swapped bodies between Séayoncé and Lesley Ann, soundtracked by a self-playing “ghost piano”. It was an excellent addition to a wholly entertaining performance, and when it comes down to it, my favourite from the festival. I’d give this show 6 stars if I could, but of course, they’d know that already. 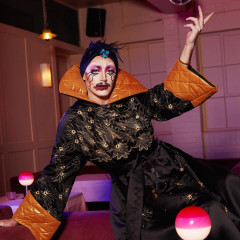 “At the end of the day, it is the evening”