An improvised musical spanning Norway, internal affairs, and how we might mitigate capitalism.

It was a cosy afternoon upstairs at The Quadrant, a close cluster of chairs and tables framed a stage cabaret-style. Guided by a formula of audience led improvisation, we followed a three part off-the-cuff musical pioneered by performers Lee and Emma, accompanied by Patrick the ever so talented pianist.

The first act followed the plight of an intense Norwegian crime drama, prompted by an audience anecdote of cash-strapped eco-guilt. A frankly dubious Norwegian accent was delivered, with certain phrases coming off as slightly questionable… Italian. Funny, with a tinge of discomfort, we were treated to a lament about being “an unselfish Norwegian man” reckoning with the wrath of capitalism, accompanied by a percussive and somewhat unnecessary fit of beatboxing. It was funny and silly, and with repeated references to “internal (and external) affairs” we were treated to a vague sense of consistency, a rare find in the realm of improvisation.

The second and third act lacked a sense of narrative, but Lee’s particularly impressive rap seemed to make up for it. What became ever so slightly schmaltzy was self-described as “something resembling group therapy”, a less than perfect end, but one laced with talent and humour nonetheless.

I’d be lying if I said I wasn’t impressed – the ability to rhyme “nepotism” with anything is quite a feat at the best of times, let alone on stage in front of an expectant crowd. It was clear that Lee and Emma have a particularly organic acting relationship, it felt natural yet comic, soundtracked by Patrick’s effortless accompaniment on keys. Their closing remarks rang true – tomorrow will be 100% different, an example of a trust in the motivation of an audience with an occasionally questionable agenda. 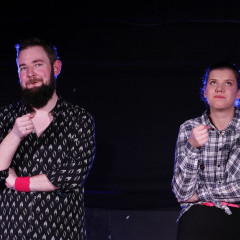 An improvised musical spanning Norway, internal affairs, and how we might mitigate capitalism.