A beautiful performance by a trailblazing dance company celebrating two decades of breaking barriers in ballet.

I am ashamed to say I had not heard of Ballet Black until a few months ago when I booked tickets to their latest show – a celebration of over 20 years as a Black and Asian ballet company. After last night, however, I am not likely to forget them anytime soon.

Ballet is a predominantly white theatrical discipline that has been shrouded in controversy surrounding its non-white participants. Whether it’s the absence of appropriately toned tights and shoes for non-white dancers or the gross request of asking Black dancers to tame their crowns, Ballet Black’s existence and continued success is the win non-white dancers have needed for a long time.

The double-billed show featured ‘Say It Loud’, an autobiographical tale of the company itself, and ‘Black Sun’, which I can only interpret as a beautifully choreographed ode to the ancestors.

Say It Loud, choreographed by Ballet Black’s own Cassa Pancho, was a 45-minute display of Black joy, which I loved to see. Black joy is an allusive concept in art and the media. As the voiceover recounted the ridiculous questions the troupe had been asked, “Why do you need a ballet with only Black dancers? “Isn’t that reversed racism?” and the like; it also points out how Black artists are pressured into performing their pain instead of their pleasure. Ballet Black took back control by laughing in the face of such ridiculous demands and expressed themselves beautifully with bright colours and smiles on their faces as they delighted the audience. The majority of theatregoers who attended the performance were Black, and I can confirm that Black joy was not only depicted on stage but radiated through every row. Featuring renditions from Black legends like Etta James and Louis Armstrong, the soundtrack was the perfect pairing for the point they were making.

I will point out that, in attending the show with a person who is D/deaf, having a projector or screen displaying the words of the voiceover would have made the performance more accessible. Whether this is something for Ballet Black to consider or the venue they performed in, I think it’s important to note.

Black Sun, the second half of the double bill by South African choreographer Gregory Maqoma, had a very different atmosphere. The opening of Black Sun was quite frankly sublime. The choreography was strong, and their formation was on point – it’s safe to say Ballet Black did not miss a step in their performance. However, I did struggle to interpret Black Sun at first. It wasn’t until doing a little research afterwards that I could grasp the concept fully. Although this didn’t take away from their elegant display, I thought I had missed a point that could have been better communicated.

That being said, from the costumes to the acting of all seven performers – I think there are usually eight – to even having a member of the troupe doing the entire show wearing their glasses, everyone I saw (myself included) left with a smile on our faces and pride in our hearts. Well done to you all for such an amazing night. No shade to the performers, but my favourite part had to be seeing kids in the audience who will be inspired by seeing themselves represented in an art form that has been white for too long – you did that for them, Ballet Black, and for that, you should be so proud. 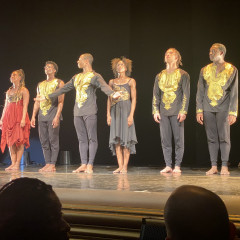 A beautiful performance by a trailblazing dance company celebrating two decades of breaking barriers in ballet.