From Entrepreneur, to TV Presenter, to Mother of four to now Singer/Songwriter, it appears as though real-life superwoman Stacey Jackson has proved once again that her talents are endless. Her most recent single ‘FLIPSIDE’ has now been reworked and reimagined into a brand new acoustic version. After the original smashed through to the No.1 spot on Global Digital Radio chart, this new version of the release is sure to capture peoples attention.

Filled with a whirlwind of ‘80s inspired pop synths, the original has quite poetically been completely flipped around, stripping it back to the sombre gracefulness of piano and cello. The meaning behind the single is one of empowerment, about being true to yourself and taking risks, becoming the best you could possibly be, even when people stand in your way and try to bring you down. With the melancholic tone of the latest acoustic version, an almost new clearer perspective of this message has been portrayed.

“The lyrics came to me quite quickly because it’s all about taking risks to become a better ‘you’, even when you have so many commitments in life and are being pulled in so many different directions. Stripping it back felt so right and just adds even more clarity to the lyrics which I think resonate with so meant people.” says Stacey regarding the lyrics to her hit single.

‘FLIPSIDE’ means a little more to Stacey than just a single, due to it’s nostalgic hitting ‘80s feel, it has also become the intro to her new ‘80s pop TV Show, ‘Stacey Jackson in the 80s’. The single comes as a result of her ever-expanding musical accomplishments. Following the chart success of her debut single, Stacey has gone on to release four albums & over a dozen singles, and recorded ‘Live It Up’ with legendary rapper Snoop Dogg.

Listen to 'Flipside (Acoustic)' below. 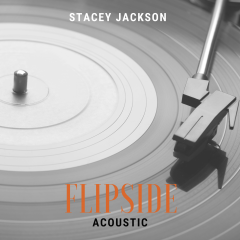 Stacey Jackson strips back on new acoustic version of 'Flipside'