Audiences all around the UK and Ireland can witness the undeniable talent of New York-based alternative-pop singer/songwriter Rachael Sage. The name rings a bell, doesn't it?

There is only one Rachael Sage, and her music is not another replica of what you hear on the radio. Evidence of her originality is the opportunity to have released 14 studio albums and still thrive. Sage's dismissal of being categorized into one genre, she happily keeps on playing around with different sounds, melodic arrangements, and witty lyrics.

New to Rachael Sage's collection of milestones is her current gig of supporting the Folk/Rockabilly legend Imelda May on her two-month tour across the UK and Ireland. Sage's set weaves together bits of folk, pop, rock, blues, jazz, and cabaret while stirring in Celtic and Middle Eastern accents.

Before heading off to the tour, Rachael Sage blesses her fans with a new single, 'Revelation Ground,' a perfect whimsical for the blossoming season ahead. The track is mature and empowering, yet playful in the melody and beautifully intimate in Sage's delivery.

The live performance of Rachael Sage is once in a lifetime experience; look up the closest city near you and be stunned by the beauty of art that Rachel Sage embodies. 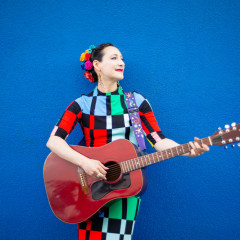 Audiences all around the UK and Ireland can witness the undeniable talent of New York-based alternative-pop singer/songwriter Rachael Sage. The name rings a bell, doesn't it?