"We wanted to make a show exploring and celebrating these kinds of relationship dynamics and love stories (ancient and unwritten) that might be misunderstood and might elude labels: love in the in-between."

Hi Shamira and Eugenie! Could you first introduce yourselves to the reader?

Hi! Salut! We’re Shamira and Eugénie – and together, we’re She Goat. We’re both theatre-makers, performers and musicians making things from scratch.

We met working in Little Bulb Theatre about 10 years ago now. Together we’re interested in extravagant multi-tasking, mucking around with gender, and finding dynamic ways to integrate live music onstage. We describe ourselves as a Franglais performance duo because we have both lived in France and the UK and have roots in both places, so we seek to make our artistic practice bilingual in little ways.

It’s also really important to us to make our shows accessible to visually impaired audiences (and find creative economic methods to achieve that!) We look disconcertingly similar and have been mixed up since the moment we met.

Describe “The Undefinable” in 3 words.

What is the premise of “The Undefinable” and what inspired you to create this work?

‘The Undefinable’ is a gig theatre show about a late-night radio show exploring unconventional relationships and hard-to-define feelings. The radio show is called ‘The Undefinable Qualities of Love’. It’s the two of us in a sort of garage studio set up playing live new music, bold covers, haunting harmonies, transforming peculiar old love letters into songs, taking callers, dancing and making coffee. A lot of coffee.

At the heart of the show we’re trying to figure out how to make space for the relationships that feel are vital in our lives but don’t quite fit with the predominant templates we see around us and in the bulk of the culture we’re consuming. We wanted to give visibility to and celebrate these valid and precious yet alternative ways of loving that often feel underrepresented or misunderstood.

Tell us more about unconventional relationships, and why it’s important to investigate this through theatre.

We’ve been investigating different ways people play with language in expressing their feelings; and how words, terminology, and communication can serve us or suffocate us. To us, unconventional relationships mean doing love differently, exploring love in a liminal space, love that doesn’t have the language or words to fully describe it, love that we feel but can’t always explain. Theatre and music are a perfect medium for expressing these ideas that don’t fit neatly into words.

Music can be like a universal language we all share. And through the vulnerability and risk of live performance we can tap into emotions and feelings that don’t need to be named: ideas they can just be shared with a community of people together in a room.

What are the underrepresented qualities of love that you aim to explore in this production?

It is about celebrating different types of relationships, that can be as valid and profound as monogamous love can be, such as: chosen kinship, polyamory, asexuality, aromantic relationships, deep friendships, squishes, life partnerships, and relationship anarchy.

The show also stems from our own partnership, which we have sometimes described as being ‘queer-platonic’: a relationship that is more intense and intimate than is considered usual for a friendship, but doesn’t fit the traditional sexual-romantic couple model. Sometimes these feelings can be dangerous or scary. Sometimes we feel a pressure to demote relationships that aren’t familial or romantic in our lives. We’re interested in upsetting that hierarchy.

We wanted to make a show exploring and celebrating these kinds of relationship dynamics and love stories (ancient and unwritten) that might be misunderstood and might elude labels: love in the in-between.

Why did you choose to include George Sand, French philosopher from the 19th Century, in “The Undefinable”?

We’ve been looking at a particular letter from George Sand to one of her lovers Alfred de Musset. Eugénie came across it as a teenager. It seems conservative and devoted on the surface (all talk of souls and deep friendship), but once decoded emerges as an outright and brilliant sexy invitation. We translate the letter in the show, and transform into a dance party ode to shape-shifting and what lives “between the lines”.

George Sand is worthy of admiration for what she stood for and how she carved her own path. ‘George Sand’ was a chosen pen name. She took many lovers and, in art and in life, sought to subvert dominant stereotypes. She wore ‘men’s’ clothing in public in the 1800s, without the required permit to do so (that’s right you needed a permit!) One of our fave things that George Sand wrote, in a letter to someone else, is “Let us accept truth, even when it surprises us and alters our views.” 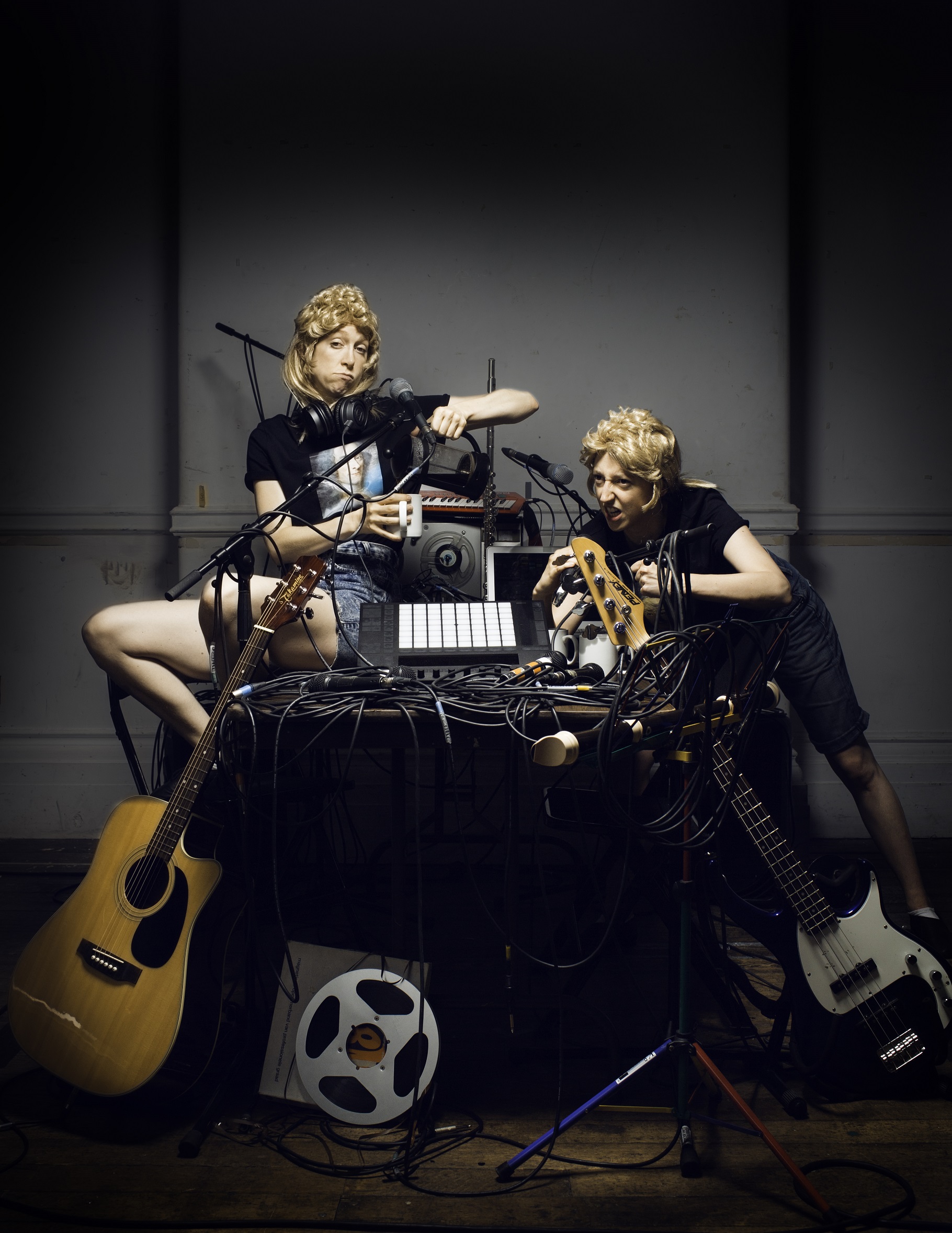 Did you face any particular challenges during this project?

We knew it would be ambitious to make every single performance accessible to visually impaired audiences, and find a way of doing it all ourselves on a small budget. Radio felt like the perfect format for us to creatively integrate audio description into the show. No extra headphones - we deliver all the audio description live within the style of the performance.

You can witness us on and off-mic, and it’s as much about us “running” the show in real time, playing music live, navigating our relationship and getting out of scrapes as it is about the actual ‘radio show’. We’ve been collaborating with Maria Oshodi from Extant (the UK’s leading performing arts company visually impaired artists and theatre practitioners) as our access mentor on the project, which has been invaluable!

Did any artists inspire or influence “The Undefinable”?

Quite a few! Some of whom are actually referenced in the show.

Films: She’s Gotta Have It by Spike Lee & co; Call Me By Your Name by Luca Guadagnino & co; Leningrad Cowboys Go America by Aki Kaurismäki & co.

How did you get into a creative career?

We both went to university: Shamira studied Contemporary Performance Making at the University of Kent, and formed the theatre company Little Bulb Theatre with three of her peers whom she met there. Eugénie also went to university and studied literature. However, she went on a year abroad as part of her studies and that’s where she met other members of Little Bulb, before the company actually existed.

After graduation, we started making shows in Little Bulb and then with other people. It became a professional career because we just kept doing it. It was – and continues to be – a lot of very hard work, but it’s really worth it. We always knew we wanted to do something in the arts, and then we did it until it was our job!

Since 2015, we’ve also been working as She Goat, and The Undefinable is an idea we’ve been fighting for over the past couple of years. It’s happening thanks to invaluable support from Camden People’s Theatre, Battersea Arts Centre and public funding by the National Lottery through the Arts Council England, and emotional and creative support from our collaborators and loved ones.

What’s great about your job, and what’s something you don’t like so much?

What’s great about our job is the fact that we can spend time making and then performing theatre and music that we are really passionate about, that explore topics or ideas we feel strongly about and that can reach others in meaningful ways.

Something we don’t like so much is that it’s sometimes extremely hard to make a living and find balance or moments to pause; there is a lot of overworking and labour-of-love undertakings going on. Which means that not everyone is able to take part. This is part of a bigger conversation, but it can make the industry inaccessible and all consuming.

Have you noticed any changes in the arts industry? If so, what?

There is definitely been some changes, especially around questions of representation, and who gets to have a voice, who is given space. We’re seeing and hearing about more and more work by artists of colour, women, trans and gender non-conforming artists, artists from working class backgrounds, and importantly the list goes on… There is still a long way to go, but it’s a start. There has also been a bit of a reckoning in relation to abuses of power and calling them out.

The most exciting thing about you is exactly how you are. This is your strength. But it can take time to recognise it. Don’t try to be like anyone else. You’re amazing and don’t let anyone tell you you’re not. And don’t forget to be kind. Always, be kind.

Choose yourself and your love each single morning. And on a more practical note: make sure you are paid properly, or at least whoever hires you covers your expenses. It’s everyone’s responsibility to reinforce that art has value and artist labour should be recognised. We’re extremely lucky to love our jobs, but we still need to pay our rent. Let’s be realistic, candid about costs, and help each other.

Where can people find out more?

On Camden People’s Theatre’s website, for info and tickets to our show: https://www.cptheatre.co.uk/production/the-undefinable/ 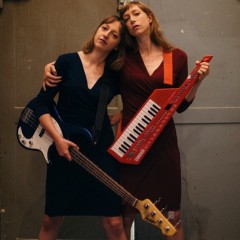 "We wanted to make a show exploring and celebrating these kinds of relationship dynamics and love stories (ancient and unwritten) that might be misunderstood and might elude labels: love in the in-between."