Voice MagInterviewsWant my job? with Em…

"I’ve traveled to amazing places and formed friendships beyond language barriers. I love making heart connections directly with an audience."

I’m Emily Carding, I’m an actor, theatre-maker, writer and artist known primarily for my solo shows with Brite Theater and Sweet Productions and also for my Tarot deck creations and esoteric writing.

I suppose one of the best things about being a freelance creative is that days don’t often look the same. If I’m working on a shoot, I’ll be up early and off to wherever we’re filming. If it’s theatre, then it tends to be more evening based, but I’ve traveled all over the world with my shows.

At the moment I’m focused on writing books, with only one or two performances coming up. I’ve just finished one book on the esoteric content of Shakespeare and I’m now working on my second book about how to connect to the world of Faery.

Freedom, undoubtedly, and not being bored. There’s always something to get on with, as I have no lack of ideas. Rather the opposite. I’ve traveled to amazing places and formed friendships beyond language barriers. I love making heart connections directly with an audience.

Financial instability is a drain, mentally and emotionally. That can be so stressful, especially as I’m a solo parent.

Richard III (a one-woman show) with Brite Theater has been a big success. Winning every award on offer at Prague Fringe in 2015 for the very first performances was extraordinary, and since then the show has performed to full houses in New York, Rome, Pakistan, Romania, Slovakia, Iceland and even St Petersburg!

I’ve done survival jobs like most other people, especially early on, but my career has always been creative. I took a twelve-year break from acting to raise my daughter, and that’s when I shifted my focus to writing and artwork, creating a number of Tarot decks and books for various publishers.

I did arts subjects at college and then went on to do a Theatre degree at Bretton Hall, then did bits and bobs for a few years until my daughter unexpectedly appeared! Plot twist.

After the twelve years as a writer/artist, I then did an MFA in Staging Shakespeare at the University of Exeter, where we were encouraged to make our own work. I met the director and creative collaborator Kolbrun Bjort Sigfusdottir there, and also we now live at opposite ends of the land we’ve both been pretty busy from that point onwards. With Kolbrun and her company Brite Theater, we made Richard III and then Hamlet (an experience), which has also toured a fair bit.

I now have a few more shows with other collaborators, including Caliban’s Codex and the sci-fi/eco-horror show Quintessence. I’ve also worked just as an actor with a few companies and been in a few movies, such as Andy Nyman’s Ghost Stories.

I sort of feel like that is what I’m in the midst of at the moment. As a female-presenting actor in my forties (although I identify as gender-fluid), you find that you don’t get seen for jobs that much. Making your own work becomes so important.

Also with the current political and financial climate in this country, it’s become more difficult to get international bookings and in the UK it’s becoming more difficult to attract an audience. Not sure yet how I’ll resolve this, other than I’m focusing on writing again for the most part right now!

Yes, I’ve noticed an effort towards increasing representation which is definitely a positive, but I think there’s still a way to go. On the downside, as I said, audiences for low-budget work are down. Brexit is an actual nightmare and a lot of us are very afraid for the future of the industry.

You were right, time travel IS possible. Use your power for good.

Follow your heart, be kind, have a not-too-painful practical skill you can fall back on when times are tough. I don’t have that and I wish I did! 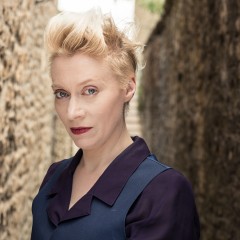 Want my job? with Emily Carding, theatre-maker and writer

"I’ve traveled to amazing places and formed friendships beyond language barriers. I love making heart connections directly with an audience."