"The world is getting smaller everyday. It is important to learn to live with people from different cultural and religious backgrounds. Through culture, we can all learn, understand each other and relate to each other."

My name is Justina Jang, and I’m a trustee of the registered charity, Korean British Cultural Exchange (KBCE) and a festival director of the Kingston Korea Festival, which runs three programmes: the Harvest Fest in September, K-Pop UK National Competition in October and Kimjang Festival in November. I am the first Korean who organised the first and second Korean summer festival at Trafalgar Square. I used to work at an arts centre in Seoul, Korea. I came to the UK to study Arts policy and management.

The Korean British Cultural Exchange (KBCE) was established to organise Kingston Korea Festival for the Royal Borough of Kingston upon Thames in 2016. It aims to promote Korean culture through cultural and educational activities in the UK. Through cultural exchange and artistic collaboration, we believe that we would understand and build a better community and society together.

KBCE has operated by volunteers and always welcomes the participation of local artists and volunteers.

The concept of Harvest Fest and Kimjang Festival truly show Korean values; it is a family oriented festival that promotes togetherness and sharing culture typical to Korea. Harvest Fest is celebrating one of the most important Korean festivals, Chuseok. Similar to Christmas in the UK, Korean people go back to their hometown to celebrate Chuseok. More importantly, on Chuseok day, Korean people give thanks to their ancestors for a good harvest and ask for their well wishes for the next year.

On the other hand, Kimjang is a very distinctive Korean practice based on making large amounts of Kimchi in the winter time. In November, Korean families make large amounts of Kimchi to last through harsh winter, normally helped by neighbours. It takes two~three days to make Kimchi. During Kimjang season, neighbours help each other to make Kimchi for each household. It represents Korean culture, making Kimchi together, eating together, entertaining each other and looking after each other.

Finally, the K-Pop UK National Competition is all about giving a platform for young amateur artists to exhibit their talents and passion to everyone in the community.

What activities have been particularly popular at past Kingston Korea Festivals, and why?

In 2017, KBCE organised an Exhibition “Dol” - a traditional Korean baby’s first birthday celebration - at the Kingston Museum to introduce distinctive Korean culture. It introduced a unique cultural practice as well as presenting a beautiful traditional Korean baby costume. Furthermore, since 2017, at the community stage, we have encouraged local amatuer artists to participate in the festival. Lots of young K-pop cover dance team and vocalists participated. This year, there will be 15 teams to perform on the day. The popularity of these events led us  us to organising the first ever KPop UK National competition in 2018. This year, 13 Dance Battle contenders, 38 applicants for Dance category and 15 applicants for Vocal category have applied for the KPop UK National Competition which will be on the 26 October.

One of the most popular audience participation programmes is a lotus lantern making by Buddhist Artist, Beob Jeon. Korean dessert and kimchi-making by Chef HS Yim is also very popular activity on the day.

Why is it so important to highlight multiculturalism in London?

London is very diverse and multicultural, and New Malden and Kingston are great examples of that. Amongst the many communities here that live and work together, there is also a very widely-spread Korean community - in fact, New Malden has the biggest Korean population in Europe! Furthermore, the world is getting smaller everyday. It is important to learn to live with people from different cultural and religious backgrounds. Through culture, we can all learn, understand each other and relate to each other. Hopefully we can work and collaborate together to build a better and more harmonious society not only for now but for the future.

What impact do you hope Kingston Korea Festival will have?

We hope KKF will provide a platform for promoting cultural understanding and building a harmonious society. We would like everyone in the borough to come together from different cultures and communities to join in the celebrations. KBCE and KKF have introduced the concept of Korean sharing culture to engage with local people in a positive way. We would like local people to take active roles for building a better society.

Furthermore, we would like to run arts education for local people to develop or discover the creativity within themselves. This year KBCE has involved local organisations such as the Malden Camera Club to run a photography workshop, ‘taking photos with your own smartphone’. It has run three free photo workshops with local people to help nurture the community’s talents and skill sets. In the process, we hope to encourage active participation of locals in the project to ultimately help the initiative establish itself as a fully community led, community-first celebration. On the 14th September and 23rd November, there will be a photo exhibition by local people. We’re also looking to introduce 'Eat Matter' and eco-friendly ways of living through the Buddhist concept of the 'Circle of Life'. We are trying to introduce different dimensions of food and diet. The Circle of Life will lead us to produce less food waste.

Tell us about Red Umbrella at Totally Thames 2019.

A community dance project, Red Umbrella is an exciting dance programme. It runs as a part of Totally Thames 2019. Han River Festival and Totally Thames have agreed to collaborate together and the Red Umbrella is their first project. Choreographer Yoon is going to make a dance programme together with her own dancers from the Move and three local dancers, along with 20 dance volunteers. They will also invite audiences to take part in this programme. The Move is also going to open the festival through Gilnori (parade) and to close the festival through Gang-gang-sul-rae (Korean traditional community dance on Chuseok Day). Han River Festival is a main community festival of Seoul Metropolitan City and gratefully it has also supported UK tour of the Move.

This year is a significant year for KKF. Firstly, it is working with Totally Thames, a well established London community festival. Secondly, it has got grants from the National Heritage Lottery Funds to organise a year long Kimjang Project. It is the first time the KBCE has supported by National Heritage Lottery Funds. KBCE would like to record authentic Kimchi recipes from North and South Korea as well as Korean Chinese residents in the borough.

As mentioned previously, ‘Kimjang’ is the Korean term for the process of preparation and preservation of the nation’s signature dish, Kimchi (fermented cabbage). Many households in Korea make huge amounts of kimchi in November to consume throughout the winter months when vegetables are scarce. This unique practice – where neighbours gather to cook together and share homemade food – was listed as UNESCO’s Intangible Culture Heritage in 2013 (South Korea) and 2015 (North Korea).

For the first time ever, KBCE is introducing Kimjang culture to the UK. Chefs will demonstrate different types of Kimchi making and run Kimchi making classes for free at the St. George Square in New Malden. At New Malden Methodist Church, we are going to invite nutritionists and environmentalists to discuss food, health and waste management.

Unfortunately, Kimjang is a rare practice to observe in Korean families and communities in the UK. The main reasons for this are that the number of first-generation Koreans has decreased over the years, the number of mixed marriages of third-generation Koreans has increased, and some local kimchi manufacturers are now providing the dish unfermented, unlike the traditional recipe. We therefore started the Kimjang Project to promote the true, original taste and ‘togetherness’ value of kimchi, here in New Malden, another Korea outside of Korea.

Kimjang: Making and Sharing Kimchi project will be an annual community Festival on New Malden High Street on the third Saturday of November.  For more information about the Kimjang Project, visit www.kimjangproject.com or contact [email protected].

How can young people get involved in these events?

KBCE has always been looking for volunteers to run the festival. We can provide work experience or internship for young people to develop their skills. Furthermore, this year, we have organised a few workshops, such as an oral history workshop and a first aid course for volunteers so that they can get certificates. We would like to have volunteers to run KBCE and the festival from the beginning. They will work to support a project manager, a project coordinator and PR/Marketers. On the day, there are a lot of opportunities to volunteer during the events. This includes running audience participation programmes, doing audience research, as well as site management. Please contact [email protected] if you are interested in volunteering or getting involved. Moreover, young amateur artists can be on the community stage to promote themselves.

Where can people go to find out more? 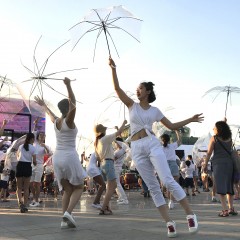 Interview with Justina Jang, a festival director of the Kingston Korea Festival

"The world is getting smaller everyday. It is important to learn to live with people from different cultural and religious backgrounds. Through culture, we can all learn, understand each other and relate to each other."