Voice MagInterviewsWant my job? with Ga…

My name is Gabrielle and I am a director, contemporary dancer, and aerial acrobat, here at the Edinburgh Festival Fringe with my show Limb(e)s at Assembly Roxy Central.

What does your job involve? Can you give us the typical outline of a day?

While here at Edinburgh, my job has expanded to include producer, company manager, tour manager, and public relations, as well as director and performer. That said, the day starts with many emails to press and programmers, followed by biking around the city all day seeing shows and exit flyering others, while trying not to get caught in the rain!

At about 7:30pm I head to the gym to do a good warm up and stretch before biking over to Assembly’s Roxy to get into costume and make-up, set up, and dance around on the stage a bit before performing at 9:25pm. After the show, I bike home with the other artist from the show and we make ourselves list five good things about that evening's performance before we watch the video and give ourselves critiques until 2am!

Right now it’s being surrounded by other artists who believe in the power of art above all rational sense. There’s something magic about that, and it’s just inspiring to be surrounded by the diversity of expression here.

I don’t like having to compete so much to sell seats while here. I go back and forth between thinking I should just relax and let who comes come and then realising I am financially responsible for the theatre and wanting to just fill seats even if people walk out halfway through because it’s not for them.

I also struggle with having to be social as the producer/director/company manager just after I have performed on stage. Usually I want to collapse and cry with a coconut water in hand, but I have a responsibility to engage.

Playing the lead female character in Cirque du Soleil’s TORUK and performing over 1,300 shows while touring internationally as an aerial acrobat over the last eight years.

I got into fire dancing at outdoor parties back home in Vancouver, and that lead me to forms of somatic dance like body mind centering where you connect with and ‘dance’ from internal organs, and that lead me to devising my own mythology-inspired interdisciplinary productions (I was about eighteen at this point).

Finally I realised my audiences mostly thought I was brilliant because they were high (!) and that lead me seek bigger challenges and so I move to Montreal to attend university for dance. Then I worked secretly and obsessively for over a decade until I made my dream of working for Cirque du Soleil come true (lots of pull ups). And now that it has and I’ve moved on, I have a huge “what next?” question, so the fringe this year is really a test to see if I want to make my own work, and if people actually want to see it.

The biggest challenges would be major injuries, and the depression that comes with them. Also, time - the perseverance and sacrifice over years and years - that kind of endurance is mentally tiring.

I ran away with the circus and have been in that touring bubble since 2011. I feel like I barely know who the prime minister of my own country is, or how to do the dishes, so I can’t really say I can accurately gage changes in the industry.

Nothing! If I knew it would take me twelve more years before I had any kind of recognizable career success I might have been dissuaded!

Don’t be afraid to fail, and don’t be afraid to have your weaknesses exposed because then you can identify and strengthen them. Do your research so you can know where and how to market yourself as an artist. And despite popular belief, you do not have to have started dancing as a kid to be a dancer - whenever you discover you are a dancer, dance.

For more information about Limb(e)s and to buy tickets, visit the Edinburgh Fringe website. 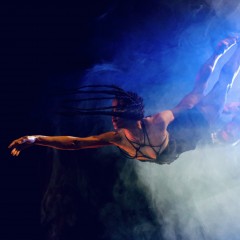 Want my job? with Gabrielle Martin