I spoke to sisters Nicola and Rosie (Flo & Joan) about performing together, their experiences at the Fringe and why the arts are important

Could you introduce yourselves to the readers?
Rosie: Hello, I’m Rosie.
Nicola: I’m Nicola.
R: And we are Flo & Joan.

What is your show about?
R: This year it’s a musical comedy show, and the songs are about topical things, things that have happened in the past year, things that make our brains tick…

Why do you do musical comedy?
N: I don't really know - we tried it on a whim. We’ve always liked it and we wrote tiny bits and pieces that never saw the light of day, and then we were living in Toronto and didn't really know anyone, so it felt like a safe space to try it, because if it wasn't very good no one in the UK would find out about it. And we’ve always watched Victoria Wood and Tim Minchin and now we love Rachel Bloom and people like that, so we just wanted to try it to see if we could do it.

Have you always performed together?
Both: No!
R: It was only in the last few years that we started doing this. We were doing it for fun the first year because we were living away from home, and we just did small gigs for fun.
N: We’ve performed as individuals in the same things, like school shows and bands, but not as a unit. It was only three years ago we started performing together.

Do you like performing together?
N: I’m going to confidently say yes.
R: Yes, it’s fun. It’s fairly easy doing it together. But we do bump heads sometimes because we’re so similar.
N: We’re very different but our worst qualities are the same - we’re both very stubborn and argumentative, but only with each other and our mum. Any other confrontation I stick my head in the sand.

Have you both always loved performing?
R: I have. We did dancing when we were younger, and school shows and stuff, and I always loved it
N: I’m not a natural performer. I never have been.

Really? It comes across as deadpan humour!
N: That's because I have no personality…as a performer. I used to get yelled at when we did dancing for not being expressive enough. There are videos of us in shows where I’m completely dead-faced, and now I’ve managed to monetise that which is really nice.

There's a good dynamic between you, with the deadpan one and the friendly, smiley one
R: I think people relate more with Nicola. You should want to relate with the smilier one but-
N: But people in general have that relationship where if someone is mean to them they want to try harder to be their friend. If someone is really open it’s too easy.

How many times have you performed at the Edinburgh Fringe?
R: This is our third year. This feels like a real Fringe though. We did Free Fringe the first year and that was just for fun.
N: And we did quite a short show, and we didn't do the full run of the Fringe either. Then last year we did Just the Tonic.
R: Actually, that was a real Fringe. They've all been real Fringes, I don't know what I’m going on about. But this year we’re asking people to pay money for tickets, so it feels like more pressure.

What do you like about the Fringe?
R: I love seeing other people’s shows, and specifically people doing things that I can't do. We absolutely love going to see clowns.
N: I don't look to go and see plays - I can't be sold on a blurb because I don't know I don't know if it's going to be amazing or terrible, and I’m not a good risk taker - so I get excited when people say you have to go and see this play. Our mum used to take us to see amateur theatre when we were kids and this feels like the adult version of that. It's the dream.

Is performing at Fringe different to other types of performing?
N: Sometimes it feels more pressurised because there’s the potential for people to be in the audience who could help you in your career, but that’s also not a thing that you think about too much.
R: I’d say it's slightly more fun because there's less winning over of the audience you have to do. Most people are at the Fringe because they like the Fringe, so, hopefully - this could be very naive - but hopefully people are already excited to be in the room. There's more fun in the air, compared to doing a gig where you’ve got 20 minutes in front of an audience who don't really want to watch you.
N: It's nice as well because we don't often get the chance to do an hour that’s just us, so it’s exciting.

You always tackle big issues - alongside cracker packer queens - why do you think it’s important not only to address these issues, but to laugh at them?
R: I think it's important to do things you care about - they’re the things that make us feel creative. We did comedy classes with The Second City and they’re all about your show being about something - and sometimes you’ll throw in some weird thing that's about nothing-
N: Which for us is always food related-
R: But if you care about what you’re talking about it makes the audience care, and it heightens the piece tenfold. It's good to make people think. I don't think comedy always changes peoples lives, but it's good to make them think.

Your 2016 song went viral - what was that like for you?
N: It was mental.
R: It was really crazy.
N: We didn't really put stuff online before that song - we like performing live - but because we were living abroad we put a couple of videos up just to show our family and friends what we were doing. With 2016 we wrote it in November and we didn't have enough shows to perform it live in because it had a sell by date, so it made sense to put it online. But we expected it to be shared to our friends and their friends and then stop, like all our other videos, and that just didn't happen. It was a massive shock, and not something you ever expect, but it was cool.
R: What was great was we were both in full time jobs at the time, so we had to go to work and couldn’t look at our phones all day, so it wasn't constantly coming at us, but I did still have to turn my phone off because it was mad.
N: The weird thing was seeing people share it who didn't know us, and that was weird for our friends and family as well, because it's suddenly taken out of your hands.
R: That was quite scary. It's quite an opinionated song and it's scary when things leave your power, but that’s also the internet and a lesson we learnt. It grew our online audience and we do sell a lot of tickets from that, so we can only really be grateful. And we really like the song!

You talk in your show about hate messages you’ve received online - do you think there’s any way to stop, or even reduce, stuff like that?
R: At the moment I don't have a solution. It would only be policing the internet and I don't think that's the best idea either, because then we live in a horrible, big brother world. The only thing is just not replying to it, or even reading it.
N: And don't buy into it if you do read it.
R: For us the hardest thing is that you can see the person’s face in the profile picture, and then you see their comment, and it’s just…like, the Alan Graham one we talk about in the show, you can see he has two daughters, and how do you separate the idea that there are people with families who are saying this stuff to other people? That was just difficult for us to compute.

Why do you think the arts are important?
R: We think they’re important for kids.
N: It's commitment to a thing. Most arts you can't do on your own. Even as a stand-up you need someone to light you or set your mic-
R: And an audience.
N: Yeah, so it's collaborative. It's that idea that you’re part of a bigger thing and if you don't turn up and you don't do your job you’ve let a bunch of other people down. And it’s learning to fail as well, and that it's fine and you can pick yourself up and it's not the end of the world. We’re in a very voyeuristic world where we have to show the most perfect side of ourselves and we’re all so scared of people seeing us fail, so you need to learn that you’re not always going to be the best at things, but if you try hard you can be your best at that thing.
R: One of the most important things I learnt from doing shows when I was younger was be on time, because if you’re late you’re letting 60 other people down. It's life lessons like that. It's so important. Arts make people good. I love it.

What advice would you give to young people who want to go into the arts?
N: Just do it.
R: Do it.
N: Take a risk. The worst thing that can happen is you’re not good at it, but you’ll find something else you’re good at. And if you’re going to do it, commit to it. If it doesn’t go well the first time, keep trying. You’ll be great.

Thanks to Nicola and Rosie for taking the time to do this interview! Check out my review of Flo & Joan: Alive on Stage here.

Flo & Joan: Alive on Stage is on at 16:00 at Pleasance Courtyard until August 26th,with extra shows added on 4, 5th, 17th, 24th and 25th. For more information and to purchase tickets, visit the EdFringe website. You can also see Flo & Joan on tour this autumn across the UK. For more information visit floandjoan.com. 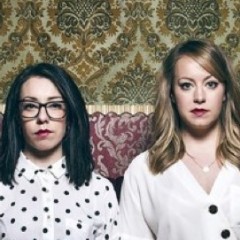 I spoke to sisters Nicola and Rosie (Flo & Joan) about performing together, their experiences at the Fringe and why the arts are important