I spoke to Cartia, Bella, Imogen and Ruby from Star Academy about their first time performing at the Fringe and their training

Could you first introduce yourselves to the reader?

What is Star Academy?

B: It’s a performing arts industry. We offer dancing, acting and singing - all three bases of the arts - so we train our performers to be able to do all three strengths.

What’s the age range at the academy?

I: I was around three.

How many hours a week do you train?

I: About 15 hours over five nights a week.

R: 20 or 22 hours for the older students. Bella and I are here nearly every day.

B: But it’s good to be here; it’s basically a second home.

R: I think it’s so easy to be here so much because it’s so much like a family. It’s not just work, there’s a good balance.

B: There’s so much love here.

How do you balance school with your training?

B: I actually finished school last year and am actually on a gap year, so it’s fine for me at the moment!

R: I’m in Year 12, so it is tricky, but I use being here as my opportunity to forget all my stress at school and all that work, and if I ever need to take some time to do some work it’s so easy just to say I can’t come in tonight - there’s no hard feelings involved - so there is a good balance. And I do use this as a refuge from my studies.

What’s your favourite thing about performing?

B: The adrenaline rush before I go onstage! I love that. And then when you’re onstage, seeing everyone in the audience smile, that’s my favourite part.

R: It’s rewarding, knowing that we’ve put so much effort in, to get such a good product back. With the amount of hours that we’re here, if we didn't get such a thrill it wouldn't be worth it.

Is this your first time performing at the Fringe?

B: It’s the Academy’s first time in the Fringe as well.

What show are you doing?

C: Our show is about Annie and Matilda - I play Matilda and Imogen plays Annie - and we travel through New York, and while we’re travelling to Broadway we meet different musicals, like Fame, Cats; big musicals like that.

B: There’s 21 in our group, but obviously the school has a lot more students than that. We auditioned for an elite group that we’re a part of and we used our time in those classes to build this show.

R: A lot of our routines were part of our end of year concert last year, so we did learn them then, but throughout the holidays we had to reorganise the whole show - Bella and I got put into a few more dances, and Imogen and Cartia don't go off stage!

B: We basically took our end of year production, which was three hours, and modified it to a shorter show that’s about an hour and ten minutes, and which is more kid-friendly.

Why did the academy decide to do a Fringe show?

R: I think one of the ambitions of Star Academy is to become children’s entertainment, so being part of the Fringe is almost like the first step. We can not only advertise Star Academy to bring more children into the school, but we can also show kids what they can do. When you get to a certain age you can think you’re too old to start something new, but we’ve got kids from seven to 18 in the show, so it shows that anyone can do it.

Do you feel like you get a different experience at the Fringe as a young cast?

B: Well, most of the performers are still at school, so they’ve still got all of that work, and then we come here and train at nights and perform, so it’s probably very different for us because others have a lot more free time. It might be their full-time job to be in a Fringe show, whereas for us it’s more of a hobby. We have to go to school!

R: We go to school, we still come to our normal classes throughout the week, then we perform weeknights and still teach on weekends.

B: Ruby and I are both teachers here too.

Why do you think it’s important to work with people of different ages?

B: It’s important to be able to work with people of all ages because you always will in life.

R: Yes, especially in the performing arts industry; as an 18 year old you need to be able to work with a five year old who’s maybe not going to pick up the choreography straight away. It’s a good lesson and opportunity to do this.

C: It’s good for us to work with the older students because they’ve very welcoming and they help us when we need help-

I: And they encourage us, and they’re like our older sisters.

Is it just girls at the academy?

B: No, we have boys too, but there aren’t any boys in this show.

Is there an imbalance in the number of girls and boys at the academy?

R: Our boys are growing in numbers, and we have all-male classes, and it’s really good to see. I teach some of the older boys’ classes, and they absolutely love it; it’s great to see how passionate they are about something like dancing.

Why do you think that imbalance exists?

I: Maybe because boys are a bit scared that they might get teased-

I: Yeah, because dance has always been a ‘girls’ thing’.

R: I think it’s just the way people see it, that boys aren’t supposed to grow up to be performers, which isn’t true!

What advice would you give to young boys who want to do performing arts but are worried about being judged?

I: Don’t feel like you have to change yourself just because others might be mean or bully you about it.

R: Use your passion for performing to express that self-doubt - the more you perform the more confident you’ll get.

What advice would you give to any young people who want to go into the arts?

I: Keep working hard, listen to your teachers.

R: Take criticism, and don't give up. Unfortunately you’re going to be told that you can't do this, but you can't think that way. We say at Star Academy that ‘can’t’ isn’t a word. We don't go up to a teacher and say we can't do something - you can, you just have to practice. It’s cliched, but practice makes perfect. You just have to try. If the passion is there you’re going to get somewhere.

Thank you so much to Cartia, Bella, Imogen and Ruby for taking the time to do this interview!

You should also read our review of The Revolting Children of Tomorrow! 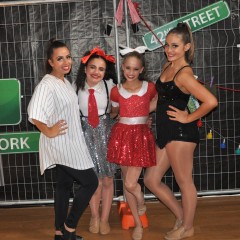 I spoke to Cartia, Bella, Imogen and Ruby from Star Academy about their first time performing at the Fringe and their training