Firstly, how is Adelaide Fringe different to Edinburgh Fringe?

It’s totally different. There’s not the same sort of acts in the theatres as we were expecting. The audiences are quite different weirdly, we’re changing the set quite a lot just to find out what works here, so things like ‘You’re The Voice’, because it’s a really well known song here, we’re actually putting it towards the end of the show, so that's working well. But other than that everyone is really friendly, everyone is happy to have us, and it’s nice to be back in The Jungle!

What’s been the most challenging part of bringing the show to Adelaide?

I think just finding the formula with the show that we had before - we haven't done it in about half a year so I think it’s finding what worked really well in Edinburgh and trying to recreate it and get it back again. It’s taken us a little bit of time as a cast to come back together and find the fun again but I think we’ve found it now. It’s good, we’re having fun again!

And what’s the best part?

Did you guys expect it to take off the way it did?

Absolutely not. I can’t even fathom how much this has changed my life especially; I don't do all of the jobs I used to do and I'm now doing this full time, and we’ve got an extensive list of things we’re doing from now until quite a lot later in the future so it’s really exciting. It’s crazy, I can't believe it.

So I was going to ask, what’s next?

We’re off on a cruise ship around Bermuda, we’ve got a deal with a cruise ship company - I think I can say that! - and we’re off to Edinburgh, and I think we go off to North America later this year, and then hopefully back to Adelaide again and the circle will continue hopefully!

And is it the same show?

Yeah, for the most part it’s the same show, it’s only its second outing ever, so we’re still finalising what the show is, but on the whole nothing’s really changed since Edinburgh particularly; a couple of new numbers. We’re making it a little bit longer for when we go to America, so we’re going to add a few numbers into it, but on the whole the same fun you’ve seen before!

Oh my god, don’t stop, keep having fun, don’t take it too seriously - it’s only singing and dancing!

Thank you so much to Fred for taking the time to do this interview! 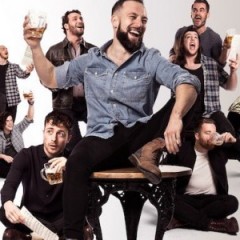 Interview with Freddie from Choir of Man