Have you ever heard of Isabel Peron? Me neither, but after speaking with Rebecca and Louise, I'm not likely to forget her.

Rebecca and Louise, the dynamic duo behind Sh!t Theatre, are back with a brand new show, 'Evita Too'. Responsible for critically acclaimed shows like DollyWould, Letters to Windsor House, and Drink Rum with Expats,they are back with a show that sounds like their most challenging yet. Based on the bizarre life of Isabel Peron, the world's first female President (and potential fascist war criminal), the two have created a musical depicting her untold and rather dramatic life story – and they've only gone and invited her.

Can you introduce yourselves and tell us about your creative careers?

We are Rebecca Biscuit and Louise Mothersole. Our influences are Performance Artists Split Britches, Bobby Baker, Taylor Mac and, of course, The Muppets. We’ve been working, performing, sometimes living and always drinking together for over ten years. We make performance art documentaries using song, multimedia and, on occasion, live animals.  We’ve won some awards and toured some places. This year we are Fellows of the Eccles Centre at the British Library, where we’ve been researching our new show Evita Too, a 2-person mega musical about Isabel Peron, the first-ever female president in the history of the world.

How did you get into the industry?

We met at Queen Mary University of London (where you are taught to be homosexual, or at least, pass convincingly). Within the first few months, we’d seen Ron Athey, Franco B and Bobby Baker and decided: this is it. Our first show was in a basement of a nightclub in Leith for the Edinburgh Free Fringe in 2010, and we got into the industry by signing onto the dole and refusing to go away. More than talent or luck, refusing to go away is the main reason people succeed in the arts (unless you’re rich or have famous parents, obviously. That would be our first piece of advice: try and have rich parents in the industry)

What has your experience(s) been like in the industry so far?

Long. During our first five years, we made no money and performed at any and every gig that came our way - cabaret nights, gallery events, political rallies. We loved almost every minute and had so much fun. Then we applied for and managed to get Arts Council funding and have been sucking at that teat ever since. Money doesn’t bring happiness, but it did pay our rent and inspired us to keep going. That teat is drying up now, and we have to find other places to suckle.

Tell us about Evita Too. What’s the show about, and what inspired you to create it?

On tour years ago, a technician told us about what happened to Evita’s body after she died: she was embalmed, preserved in a glass coffin, and then her body disappeared for fifteen years. When it turned up again, a bit dented, her husband and his new wife had her corpse installed, in her glass coffin, over their dining room table. We were fascinated by the idea of what sort of woman would have her husband’s dead ex-wife looming over her breakfast. It turned out that woman was Isabel Peron, the first ever female president of a country in the history of the world. The show is about Populism, power, legacy and compromise. And what it is like to have your history figuratively, and literally, looming over you. It is a musical called EVITA TOO because Evita is also there.

There are so many forgotten women in history, who played a huge role, but their stories have either been forgotten or were never told. Why did you choose to shed light on Isabel’s?

Isabel Peron is a record-breaking female leader with a story wilder than the plot of any fictional musical. She was a gogo dancer, an occultist and the head of a right-wing death squad. She had a personal wizard living in her house, a corpse hanging over her dining table, and she spent over five years in solitary confinement when she was overthrown in a military coup. She’s either a misunderstood rebellious genius, a fascist war criminal, a woman in over her head or none of the above.

Since Isabel is still alive today at 91, what do you think she’d think of Evita Too?

We’ve invited her actually. We showed up at her house in Madrid, and when she didn’t answer the doorbell, we left her flowers and a letter. We’ve also posted a couple of extra invites in case she didn’t find that one. So we will let you know what she thinks when she comes to the show!

Who are your modern-day feminist icons, and why?

Dolly Parton. She is a queer icon, a singular artist, a brilliant businesswoman, a genius and prolific songwriter, and possibly the biggest philanthropist alive. She is also witty and unafraid to make jokes about herself before others do. We both have tattoos of Dolly Parton, which we got in Tennessee when we went to her theme park Dollywood as research for our show DollyWould. It was the best day of our lives.

If you had the power to affect any change for women, what is the first change you would make?

What advice would you give to your younger selves?

Being young is really hard, and you’re doing ok. Please try and exercise.

Where can people see the show?

Treat yourselves to looking at our terrible website if you can find it; if not, we are on Insta/Twitter/Fb @shittheatre 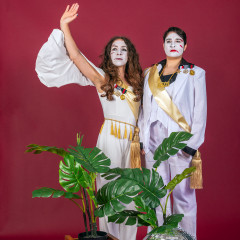 Have you ever heard of Isabel Peron? Me neither, but after speaking with Rebecca and Louise, I'm not likely to forget her.