"One of the aspects I love about being a performer is the rapport with other artists, and it’s incredible that within one city for the month of August, Edinburgh contains all the artists I admire, work with or aspire to meet. Isn’t that just magical?"

My name is Stefania Licari. I am an actor, comedian, and medical doctor based in London and originally from Italy. I have trained at East 15 in London and Ecole Philippe Gaulier in Paris.

How Would you describe your show?

MEDICO is a one-woman show about the medical world, immigration issues and what it means to become British. It is a mixture of standup, storytelling and physical comedy. The show is co-devised and directed by Chris Head and has been refined with the support of John Nicholson from Peepylokus as a comedy consultant. It is produced by my company TeatroLatino in collaboration with Ben Weaver-Hincks.

Why do you want to perform at Edinburgh Fringe?

One of the aspects I love about being a performer is the rapport with other artists, and it’s incredible that within one city for the month of August, Edinburgh contains all the artists I admire, work with or aspire to meet. Isn’t that just magical? I look forward to soaking up the vibrant energy and being deeply inspired by all the experiences the place offers.

The magnitude of it, [and] the expectations.

Though I only got into acting later in life, I dreamed of acting as a child. I suppose my first inspirations were fairy tales, particularly the Graham Green stories. They nourished my imagination, and I would spend hours as a kid dreaming of characters, stories, plots, etc. Later on in life, once I got into acting, I [got] inspiration from the numerous teachers and mentors I’ve been fortunate enough to train with or work alongside, especially master clown Philippe Gaulier, with whom I had the honour to study at Ecole Philippe Gaulier in Paris. Philippe has a contagious love and passion for teaching and art-making. He has an intrinsic and rooted sense of humanity, and I was deeply inspired to always look for that expression of humanity when making art, especially comedy.

My parents come from Southern Italy, from humble backgrounds, and they moved to the North (Milan), where they established themselves. I was very lucky to grow up in such a beautiful, artistic and culturally vibrant city in a comfortable upper-middle-class family. My parents are the demonstration that no matter where you come from, you can make it happen [and] you can reinvent yourself.

I was at primary school and participating in a Christmas play. I had a lead role and was playing a farmer in a fairy tale. I attempted to speak with the lowest-pitched voice I could manage at that age. I got a massive laugh from the audience. That hooked me.

If you didn’t have your current job, what would you be doing?

A ballerina. At the Opera Scala of Milan.

Did COVID change the way you create work? Do you approach shows with a different mentality now?

The biggest difference is I learned you cannot take audiences for granted. After such a long time with no live shows, my joy and gratitude for live audiences are immense, and I count my blessings on a daily basis for having the opportunity to express and share my stories.

I do. I feel if the artist has the right drive and the correct sensitivity, they should be allowed to talk about everything.

I would work again with Philippe Gaulier. I studied in Paris at his clown school and had the best time (and the worst) of my life. I dearly miss him and his valuable teachings.

Believe in yourself even when nobody else does.

You can watch MEDICO at 3:10 pm at Just the Tonic Nucleus until August 28. For tickets and more information, visit https://tickets.edfringe.com/whats-on/stefania-licari-medico

Saskia is the Deputy Editor of Voice and has worked on campaigns such as International Women’s Day, Black History Month, and Anti-Bullying Week. Outside of Voice, Saskia is a published author (Hairvolution) and has guest featured in various other publications (The Women Writers’ Handbook/ Cosmopolitan). She has a BA in Creative Writing and Journalism and an MA in Publishing. She is a mentor for Women of the World Global, has guest lectured at the University of Roehampton and has led seminars on Race, Equality and Diversity. She is 26-years-old, based in London, and loves to cook and explore new places in her spare time. 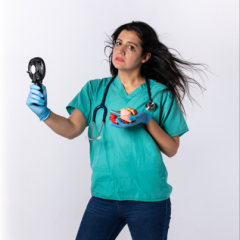 "One of the aspects I love about being a performer is the rapport with other artists, and it’s incredible that within one city for the month of August, Edinburgh contains all the artists I admire, work with or aspire to meet. Isn’t that just magical?"