Nikhwat Marawat is the founder of the award-winning mental health charity The Delicate Mind. Nikhwat’s charity was founded after his brother died by suicide and serves racialised communities, tackling mental health.

First of all, I would just like to thank you both for taking the time to have a chat with me today! Before we delve into the fantastic work that you and your team are doing at The Delicate Mind, could you tell us a bit about your ethnic heritage and how this affects your day-to-day life?

I don’t want to be convoluted but I should preface by telling you my outlook on the concept of ‘race’. Personally, I feel like it is a social construct which attaches undue importance to negligible differences – skin colour for instance.

The way this manifests in my day to day life comes down to things like my diet, where I’m a vegetarian. I’m a Muslim, ultimately I’m not perfectly, but I do believe that there is something meta-physical in Allah – I therefore follow practices such as praying.

This is a declicate tightrope to walk, however, in that I have to balance my Asian and Western heritage(s); I speak Urdu and English for example, but which language I speak and to whom depends on who it is. As second and third generation immigrants it can sometimes be difficult to balance our two cultures.

This can likely be attributed to assimilation and immigrants having to adapt to a new and alien society, because in an effort to assimilate it can be easy for one culture to manifest itself stronger than the other. This isn’t to say that assimilation is a bad thing, and each subsequent generation is getting better at it, because they conform less to how one ‘should’ be and they are instead creating their own narratives – culture’s honestly just a sensational phenomenon and we should celebrate rather than attempt to stifle it.

I remember being around nine and just watching cartoons when they were interrupted by reports of 9/11. My mother was horrified but at that age I don’t think that I truly grasped the gravity of what was going on. That came much later.

At school the day after I remember another kid reassuring me that he knows that “it’s not all Muslims”. Again, I appreciated the gesture but at that age I didn’t quite understand why he said that unprovoked. When I began to sense something was off was when my mother asked if anybody had said anything. Over time as I had begun to develop an appreciation for what happened and potential risks to my safety, I hid my religion out of concern for my safety and for fear of being ostracised because of it.

Malcolm X’s autobiography was actually something of a turning point for me and accepting who I am. The book made me feel comfortable to embrace my religion and to be proud in the process of doing so, but this naturally puts a target on your back for racists.

I’ve been called racial slurs, physically assaulted, witnessed criminal damage and been tailed by police. Still, I maintain that people have been socialised into racism and they are not born to be inherently evil – although it can be frustrating watching people offering more humanity to a pet than to another human.

A friend of mine nailed it I feel when he described being an ethnic minority residing in this country as a ‘sweet prison.

What I sometimes find frustrating is that people deny that racism is a big problem here in the UK. What is your opinion on this and what changes would you like to see to improve the situation within the country?

Firstly, I’d like to see more material investment to tackle disproportionate health outcomes for minorities – working class and racial communities often have disproportionately poorer physical and mental health. Take Hodge Hill: an area near me where fifty-percent of the residents are living in poverty.

Thirdly, I would like to see a facilitation of dialogue not only within but between different communities. The Delicate Mind does this and from what I’ve seen I can attest to the effectiveness of this approach, allowing people from all walks of life to mingle with people who they may otherwise not be able to.

Finally, I want to see the diversity that can be found in this country to be better reflected in our schools. We teach the history of racialized people, granted, but why do we only seem to focus on the negatives? Let’s celebrate the achievements of ethnic minorities and the great works of forgotten literature such as al-Jahiz’s ‘Book Of Animals’.

The Delicate Mind is a tremendous project and I genuinely applaud what you are doing there. Asian communities in particular seem to shy away from mental health and it is treated as ‘taboo’, why do you think that is?

Thanks! I feel every culture faces challenges but it’s about what the spotlight of dialogue is shone upon. Personally, my younger brother died by suicide and I began exhibiting signs of depression at fourteen. Something I noticed in the aftermath of my brother’s death is the way in which the issue is approached; people are intrusive and this can very quickly cross the line into being outright rude if I am being honest. I was inspired to not let his passing be in vain and to continue his legacy, hence The Delicate Mind.

In 2018, we had our first workshop but were so inundated by the attendance we simply had to expand. Since then we have offered tailored workshops, training and services, and often we liaise with various governing bodies and institutions.

The Delicate Mind approaches the ‘taboo’ subject of mental health on a fundamentally grassroots level. The term ‘mental health’ must be understood, re-interpreted and then communicated very sensitively, and articulated in a way that people within all these different communities can genuinely understand.

There will however always be a level of cultural conditioning that makes communities insensitive to this. People can blindly ‘trust in the process’ and are happy to sit aside and have faith all will turn out well, dismissing their suffering in the meantime until that point arrives (if it ever does).

Perhaps this is because of the baggage that is associated with being an immigrant in a foreign country, they don’t necessarily want to be perceived as being ungrateful and consequently they suffer in silence. Conversation within and between communities can help alleviate this load that is carried by immigrants.

Are there any pressures associated with being an ethnic minority that affect mental health?

So, I don’t want to reiterate what I may have already said in previous questions but I will say one thing. Ultimately, pressure is the totality of existence and there are days things will affect you more than others; we don’t necessarily have or need to have all the answers at this moment in time.

Having conversations like this though will help find these answers and we can all find them together.

The Delicate Mind is championing an incredibly important cause and can be found on the links below! 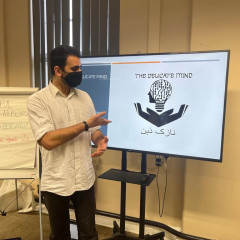 Nikhwat Marawat is the founder of the award-winning mental health charity The Delicate Mind. Nikhwat’s charity was founded after his brother died by suicide and serves racialised communities, tackling mental health.