Lumiere, is the UK's largest light festival in Durham, happening from 12th November and featuring light-based art installations across the city. I spoke to the festival producer Kate Harvey to find out more.

Lumiere is the UK's largest light festival. It's a four day festival in the city of Durham and it works specifically with artists who work through the medium of light. Light can include projection, light sculptures, neon, fire, it's for any artists who have light at the heart of their work. It's a free festival which started in Durham in 2009 and takes place every two years. It's commissioned by Durham County Council and produced by Artichoke, the company that I work for, who are based in London. We curate the festival, select the artists and plan the festival logistics.

What can audiences expect?

Every time we do the festival it's completely different because we invite a different selection of artists to the city. Durham City is such a fantastic place to work, it's full of inspiration from different times, from the river to the history to the contemporary buildings, this year we've got a lot of artists responding to some of the riverside monuments including the castle. We've got a piece which is the work of an American artist Janet Echelman. She works with fishing net and her piece 1.26 is going to be installed across the River Wear, it's interactive so the audience can use an app on their phone, to answer questions together and change the colour of the net.

What does your role involve?

I work with Helen Marriage, the Artistic Director at Artichoke, and she selects the artists to take part and chooses where she would like to put their work. Then the challenge for me is making the artistic and logistical ideas a reality. I've been coming up to Durham, making visits with artists, local partners, local communities and attending meetings with members of the council and other businesses to put the nuts and bolts of the festival together. It's a gradual building process from when we first select the artists to the reality of where those works end up in the city.

How did you get to where you are?

When I was at school I studied drama and was very keen on theatre, particularly directing. I ended up doing languages, Spanish and French at Edinburgh University and I got very involved in student theatre and obviously the Fringe. After I left university I did a Masters in Texts and Performance because I wanted to be a director at that stage and that led me to assisting in the theatre. After that I had a few jobs which were short term contracts in the theatre under my belt and it built up from there.

I became interested in the accessibility of theatre, encouraging people who might not have otherwise come to see performances to get involved. I worked at a large theatre in Chichester, as a member of their education team, doing everything from writing information for teachers to also producing youth theatre productions. Because you've got large numbers of people, they often wanted to do those performances in unusual spaces, it gives you more opportunity. I became very interested in the challenge of what it was to put art into a public space. That's what sparked my interest in what I'm doing now, we work on lots of different projects which don't take place in a theatre, they don't take place in a gallery, and that means they are physically accessible to people as you don't have to cross that threshold. Also financially, we try to make sure all our work is free at the point of delivery, which is hard, but it's to make sure that nobody has a barrier to attend.

What has been your favourite part so far?

It's great seeing the enthusiasm of people and artists when the pieces come together and certainly watching the progress of a project like Precious. We had some artists that worked in New Zealand and we wanted to find a way to make what they were doing - in terms of how they told stories - relevant to Durham. We developed a partnership with Durham Sixth Form Centre where the artists could tutor the students over Skype and begin that process of confidence building and learning. Those pieces were filmed and the clips went back to New Zealand to be edited. For us to be able to see the students' work professionally edited is really exciting. It's not one moment necessarily, it's the journey of that piece.

What are you most looking forward to?

The moment when you turn the lights on, whether its raising the curtain in the theatre or turning the lights on in this piece, when you put that in front of an audience who don't know what they are going to see necessarily. That's the extraordinary moment of doing this kind of work, watching the amazement on people's faces, watching the interest as they look at something that they didn't expect to see. Seeing how proud people are of their city when they are out in the crowd and just enjoying themselves, it's great.

Lumiere is running until 15 November. Find out more at lumiere-festival.com 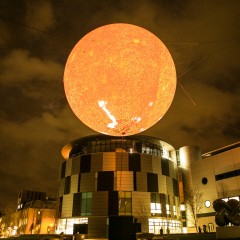 Lumiere, is the UK's largest light festival in Durham, happening from 12th November and featuring light-based art installations across the city. I spoke to the festival producer Kate Harvey to find out more.