What happens at Shakespeare Schools Festival?

At Shakespeare Schools Festival (SSF) young people get an amazing opportunity to perform abridged Shakespeare plays in a professional theatre. The process begins with schools registering to take part at the start of the year and choosing their play. In spring we run teacher workshops to help inspire the directors with the worlds of their plays. We also offer directing tools to take into rehearsals such as language exercises and staging techniques. Some schools then start rehearsals before the summer break whilst others wait until September to form their companies and cast their plays. All of their hard work culminates in a performance day at a professional theatre where the casts work alongside one of our venue directors to transfer their plays onto the stage. We have four different plays performing on the same night. Those casts have usually met each other at a workshop in early autumn led by professional directors and actors. We are now in the heart of the performance part of the Festival which runs until the end of November.

What was the main drive in setting the Festival up?

The founder, Chris Grace, produced the Shakespeare Animated Tales series which are very popular in schools. He then had the idea of offering young people the chance to perform those 30 minute scripts on stage. That's how SSF started, 15 years ago, with four schools performing plays. What Chris created was a brilliant bridge between arts and education. Over the years thousands of young people have benefited from increased literacy skills, self-esteem and confidence building.

What can we expect from this year's Festival?

This year we have 1150 schools performing in 130 different theatres. So, at the moment young actors are getting ready all around the country. One of my favourite things about SSF is when we get all four casts on stage together at the end of the evening. It's a celebration of the diversity of the schools and year groups taking part. This year will also see the first performances of our newest adaptation - a primary school script of Henry V.

What is the biggest challenge in running a festival like SSF?

Like a lot of arts companies SSF needs support. The cost of running the Festival in professional theatres is significant. As a charity we do receive generous financial help, for which we are hugely grateful, but we need to develop that support in order to ensure that young people continue to experience the unique benefits of performing in the Festival. With 35,000 young actors taking part the logistics, planning and organisation involved in running the Festival are a huge challenge. Fortunately, we have a great team working hard in the office to make it all run smoothly. The challenges are worth it. I was at Greenwich Theatre recently when, following a performance of Hamlet, a Year 7 student walked off stage and said "I've never felt so alive."

Have you seen any imaginatively adapted performances this year?

There was a Year 5 production of Macbeth in which the narrators, or storytellers, were played as detectives trying to piece together clues and solve a murder mystery. One of them had a Poirot style moustache and was wearing a top hat. It was an imaginative idea and the actors were completely committed to making it work. We ask the schools not to bring big pieces of set so some use the ensemble to create a set. In the production of Hamlet that I mentioned the cast were from Years 7, 8 and 9. They made a tableau of the castle battlements which then grew into the ghost of Hamlet's father. It was very effective to have 15 actors all playing the one character. The schools come up with some very creative ideas. We have a special school performing The Tempest in the final week. I had a sneak preview of their work last month. All of the cast remain on stage for the duration of the show and sail to Prospero's island in a boat made from ropes. I'm very excited about seeing the finished piece.

How can Arts Award be combined with these events?

Being a part of SSF can be credited for Arts Award and it's not just about performing. We have young people operating the professional lighting and sound desks, marketing the shows, working as assistant or co directors, stage managing, making props and designing costumes.

Why is it so important that children have access to Shakespeare?

He's such a great storyteller and young people love stories. We all do. Shakespeare takes us on adventures all around the world where we meet extraordinary characters like mad Kings, witches, teenagers from enemy families falling in love, evil uncles, ghosts wanting revenge, power-crazy noblemen, jealous siblings and a man who gets turned into a donkey! Shakespeare gives us people who don't just kind of want things, they REALLY want them, and young actors get fired up and inspired by the extreme nature of his characters. His plays are over 400 years old but they remain so relevant today. Shakespeare's themes include rivalry, love, double dealing, pride, suspicion, power struggles, revenge and murder to name but a few. If Shakespeare hadn't led the way then we might not have Harry Potter, Game of Thrones or Frozen.

What can young people do to get involved?

Our website is www.ssf.uk.com where you can find out how to get involved. There are still a few weeks of the Festival left so check out which theatres near you have SSF performances this year. Tell your teachers what you think, encourage them to sign up for SSF 2016 and, to quote from Twelfth Night "...Be not afraid of greatness" 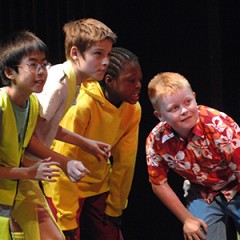 What goes on at...Shakespeare School's Festival