Linda Mason & Lesley Pinder played a tremendous role in me attaining my Bronze Arts Award. I had the opportunity to interview Linda about her life as a freelance filmmaker. Enjoy!

Has filmmaking always been something you've been into?

In 1987 I managed to sleep through the great storm! I remember waking up and seeing so much destruction around me. I went out on my bike with my camera, and started taking lots and lots of photos of the fallen down trees! When I was 19 years old I went to Zambia and was very lucky to go on safari. I had my first experience of editing the footage (on tape).

But I actually started my working career as a primary school teacher, it's only after I left the profession to go back to university that I knew that I wanted to tell stories through film.

What made you realise filmmaking was the career for you?

I loved going back to study and learning about the language of film. To be surrounded by other creative and like-minded colleagues I found very inspiring. I decided documentary was the area I most wanted to work in. My final film was broadcast on Teachers TV and this encouraged me to continue! I then decided to study film further 'Out of Love' was selected (as one of twenty two) as part of the BFI Flare Festival online programme for delegates in 2015, this documentary was part of my portfolio for my MA in Documentary Practice.

Was there a filmmaker in the industry who you looked up to?

My first love is theatre and I love playwrights such as Harold Pinter and Henrik Ibsen, who is known as 'the father of realism'. I have a love of French new wave cinema and German expressionism. I have such a wide taste in film, tv dramas and documentary it is hard to pin point. I'm also interested in female directors, my first love of a Kathryn Bigelow film started with Blue Steel.

How did your career get started?

After getting my BA in Media Production, I started my first freelance role, which combined my teaching skills with my newly acquired technical knowledge – I taught young people to make a film from conception to post production. One of these films won the 'Children and Young People Now' Award.

What have been the main challenges in your career?

Finding work – and being self-employed there are many other skills and attributes that you need to survive. It can sometimes be challenging but I love what I do.

What do you enjoy about doing freelance work?

The variety of projects and the chance to ask lots of questions! Meeting lots of people. Spending days at my mac or out with my camera. Spending time at film festivals…watching films!

Is there a project that you've worked on that you have enjoyed the most?

There have been many projects, but last year I was able to go to Canada with my filmmaking partner and we were able to spend two weeks on the road with our cameras in hand. This is still in post production, #ghosttownscanada.

What would you say is the hardest part of your job?

Always looking for your next role …. I am very fortunate that I have many skills other than filmmaking so I am able to use my teaching and education background for other freelance roles. I also teach in Holloway prison part-time.

Also, not having enough time to film your own projects.

What do you think it takes for someone to become a filmmaker?

The need/want to want to tell stories and share those with other people - a love of medium.

What would your advice be to aspiring filmmakers?

Film, film and film! Watch as much as possible…try to get as much experience as possible! If you are young (under 25) then do your Arts Award there are many levels, they are a fantastic way to learn, share and celebrate your creative talents. An example of a film project I just finished with young people, who were aspiring filmmakers http://hcafilm.tumblr.com/ 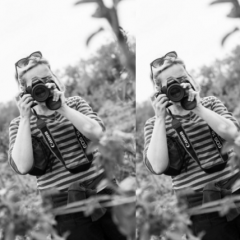 Linda Mason & Lesley Pinder played a tremendous role in me attaining my Bronze Arts Award. I had the opportunity to interview Linda about her life as a freelance filmmaker. Enjoy!