Daphna Attias and Terry O'Donovan are alumni of The Royal Central School of Speech and Drama's MA in Advanced Theatre Practice. Louise Ripley-Duggan took some time to chat with them about their theatre company, Dante or Die, and their time studying at Central.

Can you tell us a bit about how Dante or Die came about?

T: As part of our course we did a site specific unit. That was the first time Daphna and I worked together – we set our piece in Kennington Park. We discovered that we both really loved building performance pieces around spaces. That summer we were offered the opportunity to produce a piece aboard the HMS President. The gentleman who facilitated that for us advised that we get involved with Thames Festival. We were invited to join the festival, and sort of had to make things up as we went along. 'Dante or Die' had been graffitied on a wall in Kennington Park where we put on our first show, so we went with that as our company name. Ten years later we are still running!

D: We had wanted to start a company - that was always the plan. Don't be fooled, though, it didn't 'just take off', things don't work like that in this industry. We had no clear plan at the start, we had to figure out where we wanted to go as we went along and that took a few years.

So, ten years on, what kind of work have you settled into making?

D: It's important for us to keep what we do very open. It's not just site specific, although primarily we are inspired and influenced by spaces. We work very physically, the work is immersive, taking audience experience into the core of the event, taking all of their senses into the show.

T: We like to choreograph the audience to a certain extent, so that their bodies are an active part of the space and experience.

It seems that the development of Dante or Die has been a natural progression from your MA course. What role has Advanced Theatre Practice played in your work over the last decade?

D: Actually, we still collaborate as co-makers with people that we met during Advanced Theatre Practice at Central. We also can't ignore that the course exposed us to site-specific work, which remains our biggest stimulus. Each term we were put into complete companies and pushed to collaborate with different forms, skills and interests and that was the way we were taught to make work, and in many ways that is still how we work. At the time we were left a little bit in the dark as far as business skills were concerned but that gap in the course has since been spotted. Central now teaches students' how to work with budgets and write funding applications – core producing skills are covered.

What have the highlights been in your careers so far?

T: Our piece I Do was commissioned by the Almeida. It's a site-specific piece which takes place in a hotel. The audience is split into six groups and they experience the same fifteen minutes of performance in different orders. We worked very closely with playwright Chloe Moss to keep the narrative at the centre of what we were doing, while playing with the different narrative orders and physical spaces. The audience response was great, and we were immensely proud that it moved people and engaged those who weren't necessarily into immersive theatre before coming along.

It sold out and got loads of press which was brilliant for us, and we took it to lots of festivals around Ireland and the UK. La Fille a la Mode was also amazing – that was a show we made about 'It Girls'.

D: What was so great about that was that we took it to lots of very different venues so the show had to adapt to each different space - it was a different show each time which was fascinating, we got to really tap into how the performance space is as much an active part of the performance organism, as the actors or the story.

What drove you to do the Advanced Theatre Practice course which led you to this kind of work?

D: I came to London to do the MA because I wanted to work somewhere with a different perspective, but directing new ground-breaking work. The collaborative aspect really drew me in. I studied visual theatre in Israel. I worked a lot as an assistant director, making very visual pieces, but I felt I needed to push to be a maker in my own right, and I needed a safe environment in which to experiment.

T: I had finished a degree in film and theatre and I wanted to experiment further with performing and directing. I knew I wanted to make work that was more within the physical theatre world and the course really fit with creating that style of work.

We've covered the background, so what's next for you both, and for Dante or Die?

D: We are working on a project called Handle With Care with Chloe Moss, the playwright of I Do. It's the story of a woman's life over a span of twenty-five years told through the storage units that she hires throughout her life. We're planning to make the space in empty office blocks, and hopefully it will come together for Spring 2016.

What advice and caveats do you have for hopeful theatre-makers?

T: Prepare for administrative and financial obstacles. We had a project for which we basically spent a year writing funding applications and it never came to fruition. It kind of took two years out of the company's life and it then took a little while to get back on our feet.

D: What we took from it was that we needed to reconnect with our practice and find what excited us about making again. We set up workshops to give ourselves space to just play and get making again – funnily enough two shows came from those sessions. When a period of frustration like that comes along, you have to go back to the core of why you were making in the first place.

T: Adapting to the system you have to work with to actually get your work put on teaches you a lot. Having nice ideas is not the hard bit, it's making them happen that poses the toughest challenge. Theatre-makers have to be realistic about those challenges and think pragmatically about how to overcome them.

D: Thinking pragmatically is definitely a must! Another piece of advice is just to make the work and get it out there.

T: Find whatever way you can to make money and then just do it.

D: Be true to what interests you and MAKE WORK. 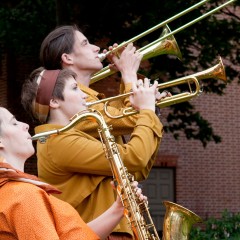 Daphna Attias and Terry O'Donovan are alumni of The Royal Central School of Speech and Drama's MA in Advanced Theatre Practice. Louise Ripley-Duggan took some time to chat with them about their theatre company, Dante or Die, and their time studying at Central.