The annual festival held at Brighton's prestigious grass roots venue, The Green Door Store, saw its eighth outing this weekend, where artists from across the south coast scene descended upon the venue over the span of two days. The event was a special one, and one of the biggest that the venue has attempted. It ultimately was a resounding success, further proving why Brighton is the place to be for UK counter-culture, and for featuring some of the most exciting new rock and punk artists around.

The first day saw Dagobah Sisters open the show, with their distinctive metallic sludge setting the tone for what was to come. Following were TOAST and Mangö, the latter of which particularly impressed with their complex songwriting and expert musicianship on display. Lambrini Girls caused a ruckus in the venue’s bar area, where the feminist garage-punks created a raucious atmosphere as they moshed in and out of the crowd and danced on the bar. The band brought with them an energy that continued throughout the first day, with WACO, Hanya, and Murmur following suit, the crowd growing larger with each performance, to the point where the stage and the bar were both packed. Beach Riot and headliners Lime Garden concluded the first day, ending on a high note that carried into the next day of live music to follow.

Sunday was just as stacked as the day that preceded it, opening with sets from upcoming artists Hutch and ELLiS.D, before Out of Love and Tally Spear saw the sun go down, as the night got heavier. Punks SNAYX took a leaf out of Lambrini Girls’ book by playing their set in the bar area too, in a similarly lively affair. The band tore through some blisteringly riff laden tracks before ending on a rendition of Slowthai’s Doorman, which obviously went down a storm. Next was Slant, a band who channelled a theatrical energy, with dramatic vocal performances from duelling singers and showcasing crisp songwriting chops. The night ended with Snake Eyes, followed by local favourites Wife Swap USA and LibraLibra, both bringing the noise in their fuzzy, abrasive sets. Holiday Ghosts ended the festival triumphantly, delivering clever lyrics with a pop rock sensibility that demonstrated their sheer talent for storytelling through music.

The festival was just as, if not more successful than those of years past, highlighting the wholesome community that surrounds the Green Door Store after their many years of putting on stellar shows. It is to be lauded that the venue champion so many incredible young bands, and it was a refreshing change to see such a variety of music, performed by a myriad of some exciting and diverse alternative rock musicians, all very much keeping not only the counter-culture alive, but also helping to keep places like The Green Door Store open. These scenes are some of the most important to music culture, they should be protected and applauded, and it is festivals like 234 that demonstrate exactly why that is. 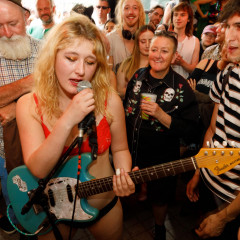