It is well known that the worldwide music industry is rife with instances of sexual assault, mainly perpetrated by men in positions of power. Women in music are too often subject to misogynistic behaviour, what is being done to combat the issue?

The worldwide music industry has a glaring problem – male musicians, music producers and label executives are sexually assaulting women at an alarming rate. A Musician’s Union survey from last year reported that 48 percent of musicians and music industry professionals in the UK have encountered sexual assault at work, a staggering amount when compared to other professions. In the US, the Music Industry Research Association survey reported that as many as 67 percent of women respondents had experienced sexual harrassment.

Men in the industry are known to exploit and abuse musicians who are women, female fans, as well as women they work with. The misogyny doesn’t end at the professional level, as male fans are just as abusive at shows, where groping and assault fears are ever-growing.

Countless examples of abusive behaviour towards women can be found in music, whether from decades ago or as recently as last week. It has become commonplace to see striking headlines surrounding a famous artist and their problematic actions. The most ridiculous part about these awful stories is that a lot of the time, the perpetrator will be given nothing more than a slap on the wrist. Even the abuses inflicted by music legends like David Bowie, Elvis Presley, and Bob Dylan are almost forgiven in pop culture, the victims ignored.

Much of music may not be directly violent towards women in its messaging, but it does often include infantilization and objectification in lyrics as well as in performance. Women are almost commodified in many of the most popular songs around, often conveying an assumption that they are open to advances, which sets a troubling foundation for coercion and sexually abusive behaviour.

The recent news regarding a rape that Chris Brown allegedly committed aboard his yacht exemplifies the issue. After this damning allegation and his well-known proven domestic abuse offences, why does he still have a career? Marilyn Manson has also seen a large amount of scathing accusations thrown at him by multiple defendants, yet is seemingly rewarded for it with features on Kanye West’s DONDA and Sunday Service performances.

The allegations surrounding Chris Brown are just the latest in an inexcusable litany of offences that the music industry has racked up over decades. Take a look back at Phil Spector’s treatment of Ronnie Spector, R. Kelly’s trafficking offences and allegatory sexual abuse of late R&B star Aaliyah, or the rampant allegations surrounding the 2010’s punk rock scene, and it is plain to see the sheer amount of abuse that women have faced from high-profile musicians and music professionals on a regular basis.

The abuse that Ke$ha allegedly suffered under producer Dr. Luke, in a case since dropped, sparked a #metoo movement within the music space, where huge stars like Lady Gaga and Lily Allen, amongst others, spoke of their own troubling encounters – shining even more light on the already blatantly misogynistic nature of the music industry. More and more stories are being told, and the industry is finally starting to face its most glaring problem, but much more needs to be done.

Abusive behaviour towards women is not only reserved for high-profile musicians and industry professionals, the issue is just as apparent at the grassroots level. Many female fans have stated that they have encountered sexual harrassment at live music performances.

The harassment can have a detrimental effect on confidence in going to gigs, and can lead to women wanting to avoid certain crowds and venues. All music venues and festivals can be seen as hubs for this type of behaviour, no matter the genre of music played or the artist performing. Recent news of spiking reaching ‘epidemic levels’ in the UK further exacerbates the fear that women feel at music venues.

It is proving difficult for promoters and venues to deal with the issues, and there is a significant lack of support given to those who have had to endure abuse. The ways in which female fans can be targeted at events devastates mental and physical health of victims, and pushes them further away from wanting to participate or pursue music, which is a predominantly male-led industry.

Alternative music genres like rock, metal, and punk specifically have been scrutinised heavily for their lack of diversity, as the vast majority of bands and artists within the alternative charts are predominantly white and male. Because of this, the heavily masculine nature of the music is further bolstered. Viewpoints from both female artists and fans are often shunned or belittled, enabling misogynistic rhetoric to thrive in the scene, which can then escalate into abusive behaviour.

When an upcoming band does in fact include female members, they are almost instantly sidelined, forever being compared to acts like Paramore or Evanescence, and then judged or ignored before their music is even heard. A common phrase used in conversation between alternative music fans is “female-fronted band”, a title that automatically gives inferior connotations, as if the only interesting part of a group is their vocalist’s gender.

It is maddening that genres that are initially deemed egalitarian like punk and metal are experiencing such discrimination towards women. The issue of misogyny runs as deep in grassroots scenes (if not more so) as it does on a world scale, and it is worrying.

Thankfully, it seems like times are changing, albeit slowly. Artists like Myrkur, Emma Ruth Rundle, Nova Twins, A.A. Williams, and Chelsea Wolfe amongst others are finally getting the spotlight that they deserve from rock fans, and are becoming increasingly welcomed into the alternative scene. Progress is certainly being made, as newer generations enter the industry.

Many of those who have experienced sexual assault feel as though they cannot speak out about it; the Musicians’ Union reported that around 85 percent of victims do not tell anyone, for fear of judgment or losing their job. Having men in positions above young women means that victims are usually reliant on them to make a living – the power dynamic increases the risk of exploitation.

More support needs to be given to women within the music industry, and it could come in the form of women-led support groups, female-focussed music organisations, and increasing the amount of women in senior roles in the scene. If more support was given, then women might feel much safer, and then the number of women working in the industry as musicians and music professionals would increase – which is a win for everyone. However, increased representation is only half the battle, and men who perpetrate abuses should see more punishment for their actions.

Naomi Pohl, deputy general secretary of the MU, told The Guardian: “I do think the music industry has been slow to recognise that we have a problem,” adding, “If you’re an artist signed to a record label, your contract will probably deal with what royalties you get, what you agree you’re going to deliver. Is there anything in there about artist welfare, about abuse and harassment? Probably not. Do the workplace policies and procedures cover artists and people who are freelance? Probably not.”

Over recent years, more men that have been called out by victims for their behaviour are being dropped from their high-level positions, thanks to the #metoo movement. Powerful executives such as L.A Reid from Epic Records have been pushed out, and more are being called out for their behaviour within firms. Musicians have also been using their encounters with sexual assault and achieving remarkable artistic triumphs after harrowing experiences. For example, the critically acclaimed album CALIGULA by Lingua Ignota was written in response to the abuse she suffered from a male musician within the metal scene.

Pohl highlights just some areas that desperately need to be looked at, both at a label and a venue level, but with many passing the issue of sexual abuse off as something that just tends to happen in all workplaces, there is still a long way to go before the problem gets the recognition that it deserves. The music industry needs to progress its culture rather than just accepting it, and with more and more fighting for female voices in music, the time for true equality is now more attainable than ever before, but still has a long way to go.

Change can occur through men becoming allies to women, recognising the exploitative nature of the industry and protecting those vulnerable from harm. Fundamentally, changes need to be made to the way in which female musicians are treated, and men need to avoid and call out gatekeeping, judging and stifling female artistic freedom. Hopefully, with the vast amount of research conducted and abusers called out, the industry can continue to become safer. But that can only be reached through evolving its firmly ingrained misogynistic and harmful culture, and with endless sexual assault stories still surfacing from within music, each step forward is seemingly met with two steps back. 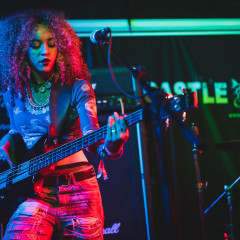 It is well known that the worldwide music industry is rife with instances of sexual assault, mainly perpetrated by men in positions of power. Women in music are too often subject to misogynistic behaviour, what is being done to combat the issue?