New-Jersey born Brian Donnelly, otherwise known as KAWS, opened a new virtual exhibition that runs up until 27 February. What makes this particular exhibition special is that it is not only available in person at London’s Serpentine North Gallery, but is also accessible at home through both augmented reality (AR) in collaboration with app developer Acute Art, and the gaming platform Fortnite, a digital world in which one of the much-talked about metaverses is intended.

The exhibition is yet another example of the art world embracing new technologies and taking the plunge into the gaming sphere as an attempt to get more young people interested in art. KAWS is an artist that has been around since the 90s, and has seen success in many creative avenues, but his ‘New Fiction’ exhibition is the first time that the artist has delved into the virtual space. Given that his characters have garnered increasing popularity amongst young people thanks to streetwear collaborations, it makes sense that he would use gaming as a platform to exhibit his work.

So, after an hour or so of downloading the game onto my PS5 console, whilst making things pop up in my room through the Acute Art augmented reality app on my phone, I ventured into the depths of the Fortnite metaverse, and it was underwhelming to say the least. 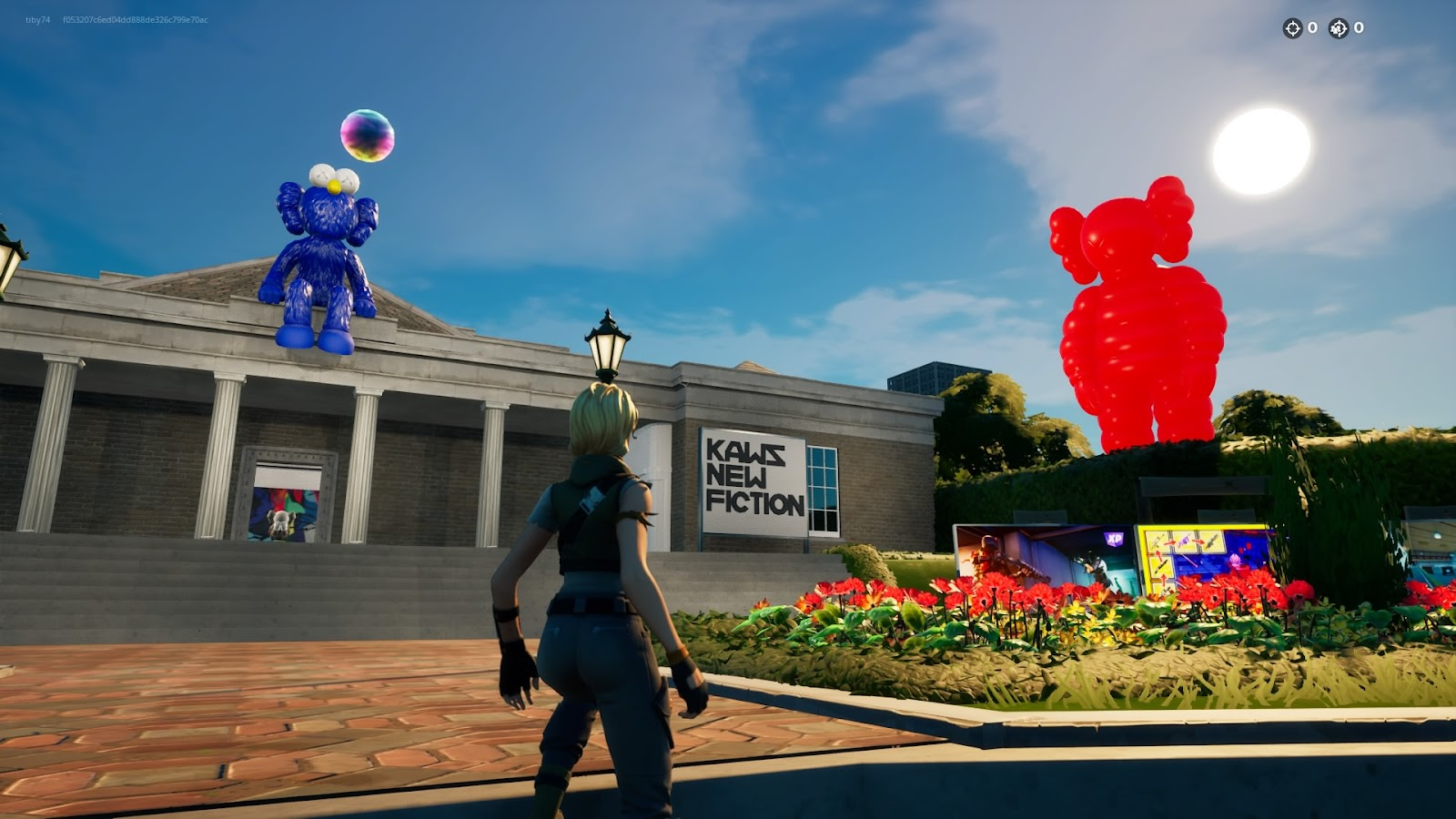 Players are dropped into a hub, with a large gallery in the backdrop. A blue mouse-like character perched on the roof, and another orange one stood adjacent to the virtual building. Upon entry, the viewer is greeted with more sculptures of the same ilk, alongside brightly colored and somewhat abstract paintings that are adorning the walls. 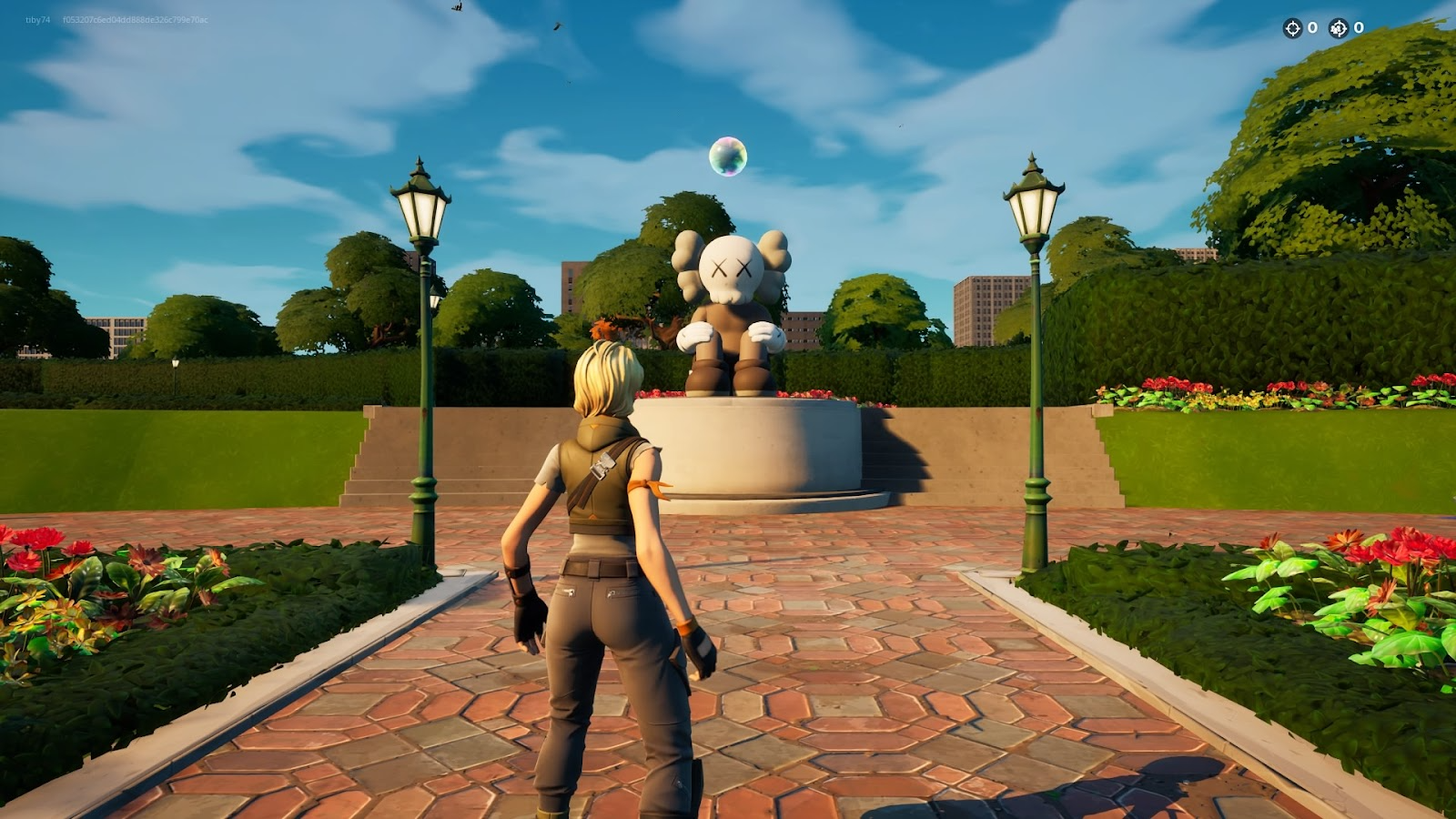 KAWS’ iconic ‘Companion’ character takes centre stage in many of the pieces displayed, through the form of various digital sculptures posed in slightly different ways, and also in a few of the digital paintings. The character is renowned around the world, mainly due to the various vinyl toys that KAWS has been selling for years, but the artist hasn’t really taken the time in his career to evolve the idea much further. 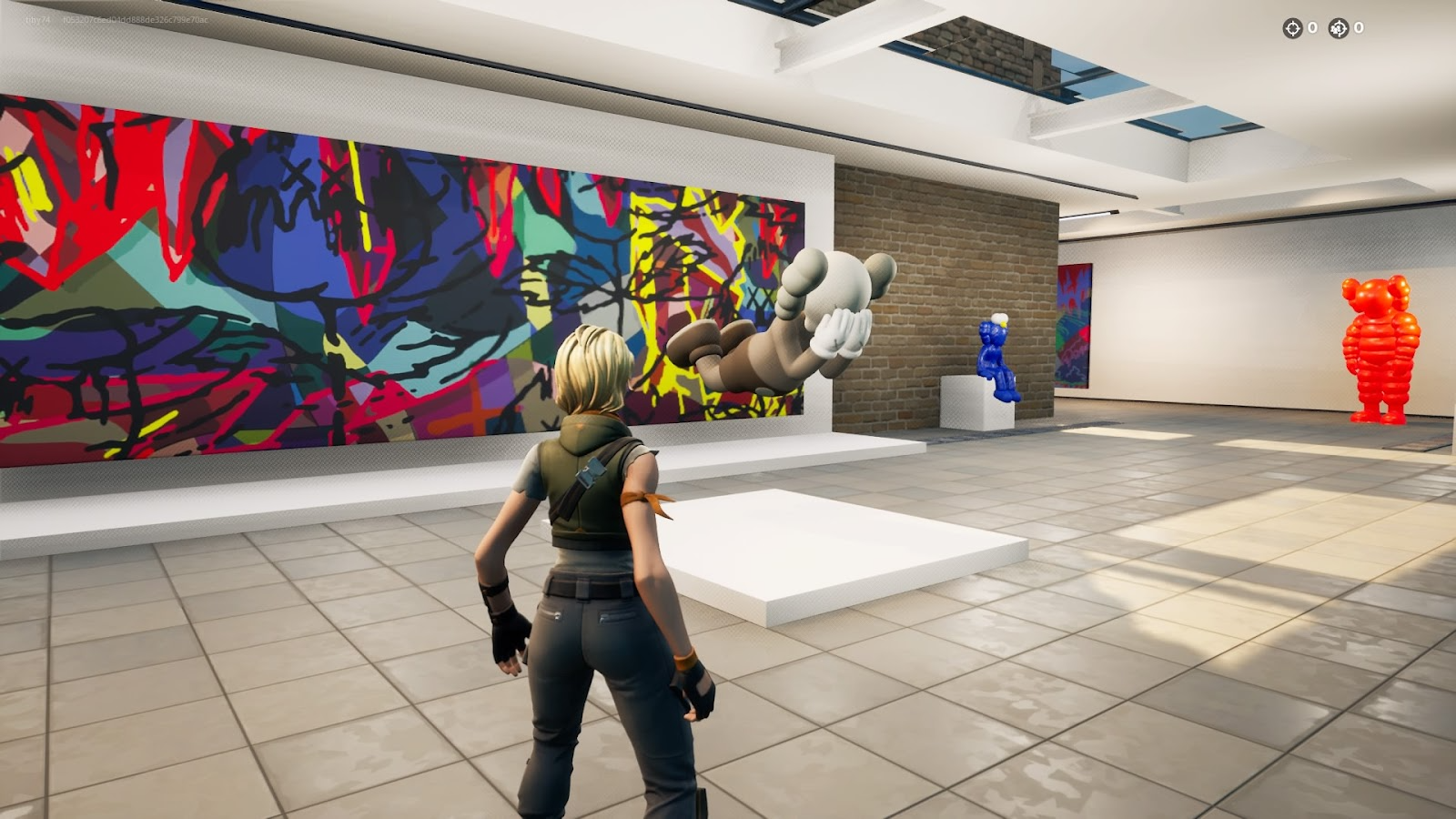 Companion is certainly a well-known property in modern pop culture and fashion, aligning itself with high-end brands such as Dior, and Supreme, as well as everyday apparel brands like Nike, and even musicians as popular as Kanye West. But the character doesn’t present much intrigue within a dedicated exhibition, especially with the digital versions showcased. This is not because the art on offer doesn’t physically exist, but because it is rather underwhelming, unsurprising and fairly uninteresting in its colour schemes, application and the even general positioning of the digital toys. 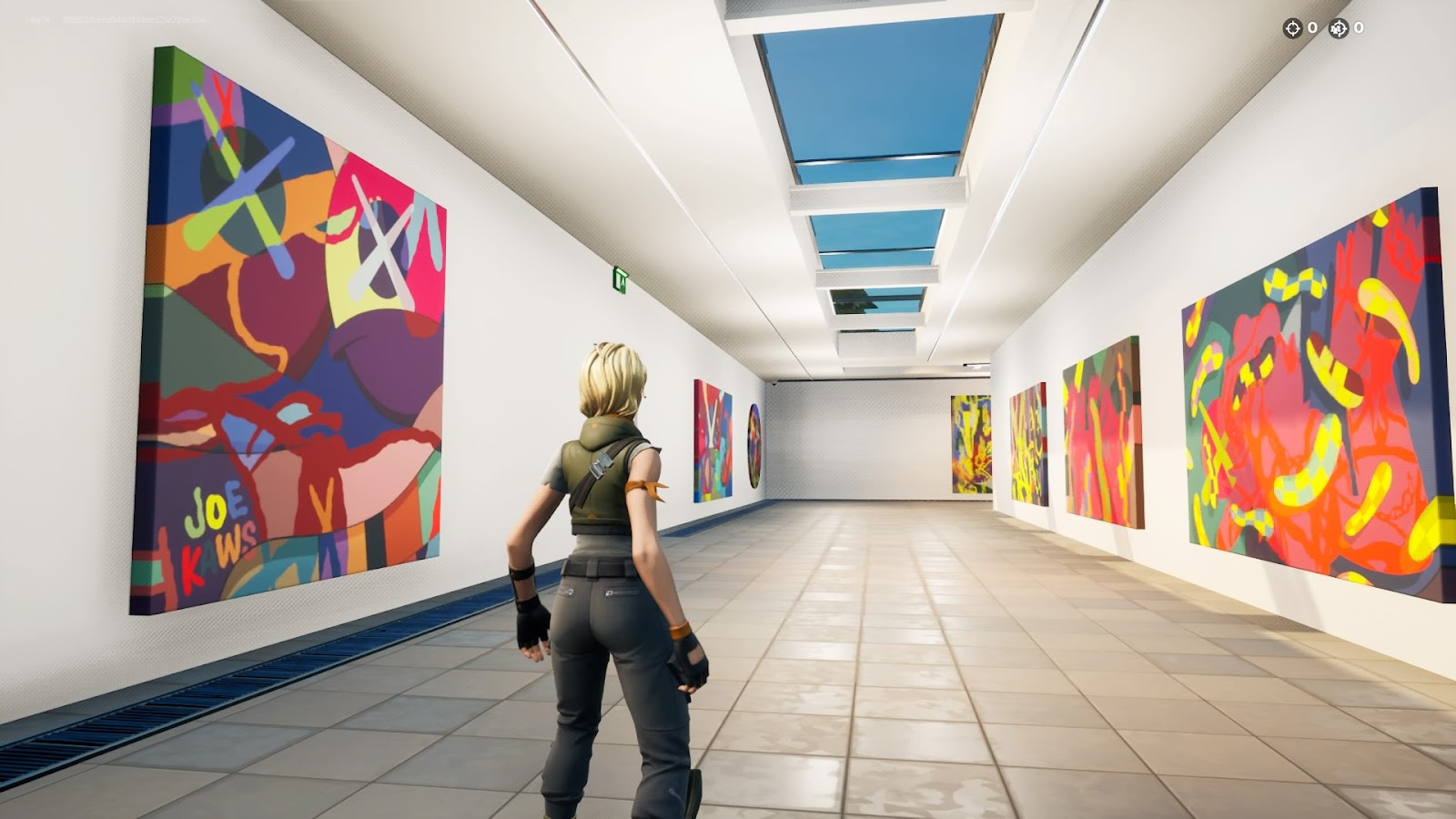 The paintings exhibited don’t invoke all that much feeling either, usually depicting a simplistic scenario involving Companion or an abstract splattering of colourful shapes within silhouettes, but never anything all that bold or impressive. You would be surprised to find that they were painted by hand, as they could just as easily have been screen-printed. Although the quality of each virtual piece is decent, the actual art itself does leave a little to be desired, and viewing it through a game does it no favours, considering it is all static, and rather small feeling. 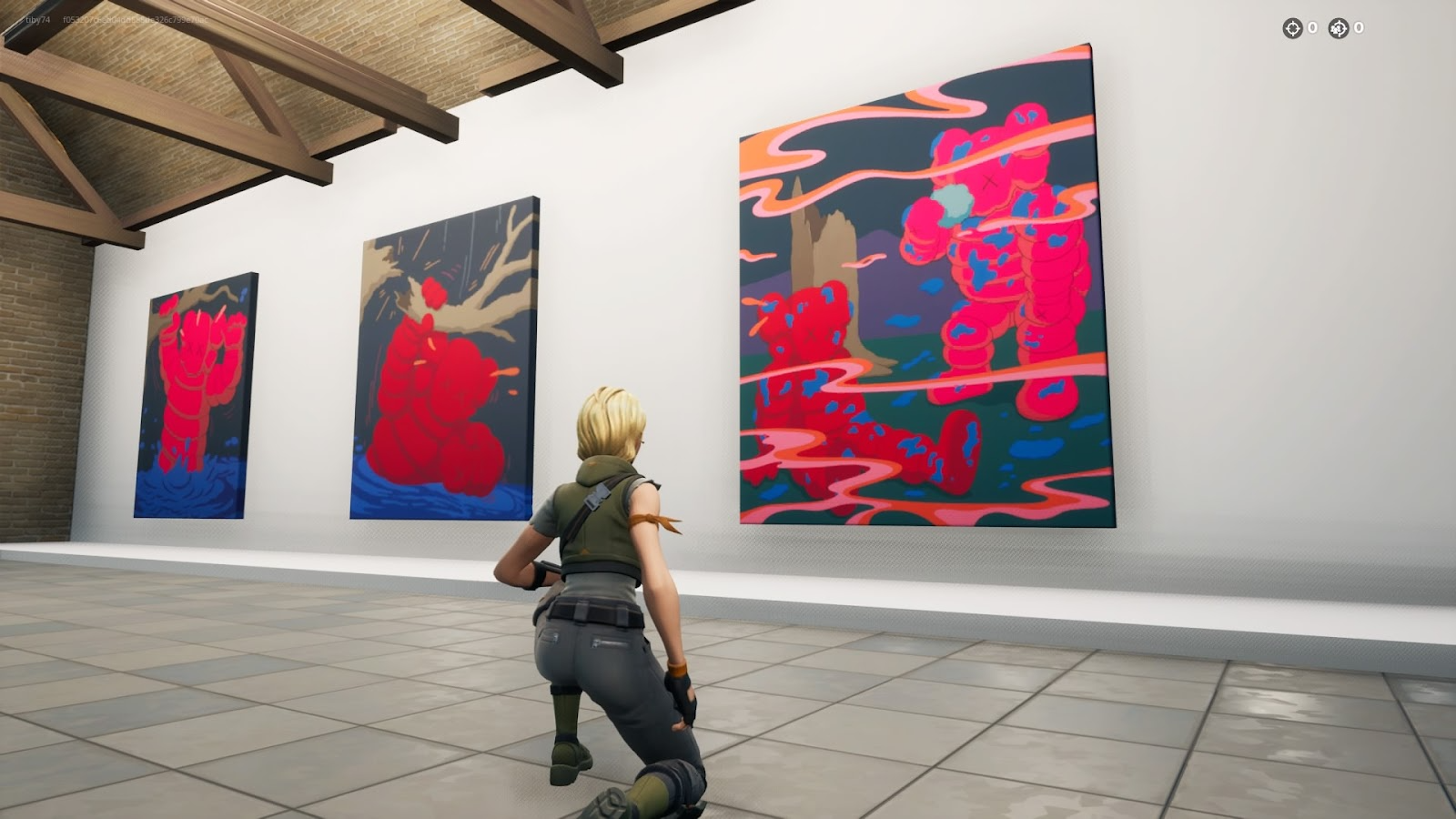 All that  being said, Companion could potentially prove a good mascot for a playable character skin in the actual game, indeed there are already four such skins – each a different (but rather bland) colour variant of a skeleton Companion. However, there will most likely be only a small number of players who will choose to don the look, especially considering the fact that they would have to play alongside those who would rather play as well known characters like Spiderman, Naruto, and even Dwayne Johnson, to name a few.

The interactive gallery seems pretty empty, devoid of any feeling and attention, almost like it was created for the sake of it (or maybe to sell toys to kids?). It's surely good business, but is pretty dull in an artistic sense. However, it is free admission, and has the potential to garner a younger audience, whilst diving head-first into an emerging AR/VR art space within gaming, so it’s hard to complain too much. Generously, I could say that the ‘New Fiction’ showcase at least sets a low bar for future gaming-based digital art exhibitions to then surpass, and provides a foundation in which other artists can improve on. However, it is ultimately pretty uninspired when visited in the game. 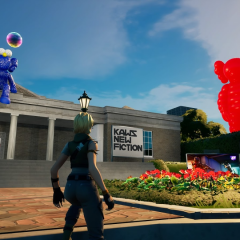