All Hands to the Pump… has some serious talent, not least the versatile, and in this case enjoyably vulgar/sassy leasing lady Beth Vyse AKA Olive Hands. The comic timing and absurdity of her cast mates is equally brilliant and engaging in parts, the trouble is, this platform doesn't make the most of any of it.

Things start out highly enjoyably, as the audience are beckoned into the dark Bunka space of Heroes' The Hive by an enormously bottomed sea-man — no offence intended to the actress in question, it is quite clearly not a real bottom — complete with cardboard handlebar moustache and wobbly heels. We're handed inflated udder-like clinical white gloves, which we wave around to a pounding soundtrack of Put Your Hands up In The Air. It's loud and silly and fun.

Olive enters the stage and delivers a rollicking cabaret number for her imaginary cruise ship — stroking faces, sitting on laps, staggering around in a drunken state that is convincing and hilarious. At numerous other points in the show she goes into an uncontrollable fit on a male audience member's lap to raucous laughter from the crowd and pure embarrassment from the man in question.

The problem is, there are bursts of incredible talent, that are then weighed down by a totally mental plot — good if done slickly, but this isn't — with long portions that weave around with little content to grasp onto. The laughs don't come fast enough to keep a real hold on things, and the moments around the directly funny material is too ambling to get much else from. The lead performers have their own very well-recieved solo shows at the Fringe, which might explain why this first showing of their group show has had less attention. It could very viably swing the other way and tighten up over its run.

As for the audience, there were a few walk outs, but also lots of hearty laughs. No bad necessarily, but not nearly what it could be. 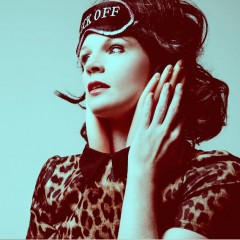 Beth Vyse as Olive Hands in All Hands to the Pump...