Voice MagReviewsThe Girl Who Fell In…

Quite frankly, The Human Zoo, have managed to create the most successful piece of ensemble theatre I've ever seen. In a performance space about the size of a small shed, these five actors used just about every nook and cranny of it to perform the story of a dysfunctional troupe of actors, performing their sketches on the side of the road to pass the time, following the spontaneous combustion of their car's engine, leaving them stranded.

Wacky and humorous, each comical scene worked wonders for the audience, full of witty remarks and imaginative movement sequences, accompanied by an accordion throughout, giving it an authentic French clown feel. Combining storytelling and clowning techniques, the cast masterfully immersed the audience in their bonkers stories, from The Girl With Stars in Her Eyes, to The Man With His Head in the Clouds.

I must admit that as the show went into its first five minutes or so, I was slightly concerned that they had played all their cards at once and that the whole play would be one big clownish kerfuffle, accompanied by music - which although extremely entertaining, I feared would become tedious. But boy, was I wrong! It turns out those, seemingly empty, suitcases were filled with a multitude of props that would be used with ingenuity throughout and behind those painted faces and quirky costumes were performers with an array of talent. There were puppets, songs, drums, ukuleles, trombones, accents from all over the world, dance routines, talking animals, light shows - they even whipped out a cheeky sax at one point.

Engaging the audience throughout, not a moment was without intrigue and not a word was wasted, as this cleverly written show moved seamlessly from elegant rhyming verse to witty, stylised dialogue, culminating in an ending which was sincerely magical and genuinely moving.

It's gotten to a point where I have now run out of adjectives, and all words synonymous with 'very good' just don't seem to do justice, so all that's really left to do is substitute adjectives with relevant noises. So, in summary, there were lots of 'ooh's, a bit of 'ahh', a great deal of 'haha!' and it all ended with an 'awhh' (as well as a few goosebumps). 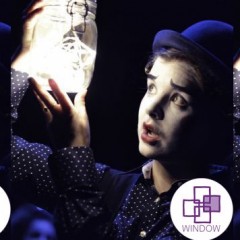 The Girl Who Fell In Love With The Moon