All three writers sat in conversation with festival founder and Artistic Director, John McLay to discuss their various routes into writing and their top tips for budding children and YA fiction writers.

Where did he begin?

Martyn Ford honed his writing skills as a journalist at a local paper, before publishing his debut novel The Imagination Box in May this year. He has also tried his hand at script writing and it was interesting to hear how many closed doors he has navigated his way around to get to this position. Novel writing can often seem like a career that is destined for the chosen few, when it fact it is most likely the result of pure slog and dedication for a majority of writers. Ford still works as a local journalist.

'There is a box. Anything you imagine will appear inside. You have one go, one chance to create anything you want. What would you pick?' That's exactly the question ten-year-old Timothy Hart gets to answer after discovering The Imagination Box. The greatest toy on earth.

Ford read a section from the beginning of the book, that contained fast-paced dialogue and a great deal of laughs. The writer has a talent for surreal humour, and the book is well aimed at a YA audience who haven't lost their thirst for magic.

Ford's top advice (and indeed, that of his fellow writers) was to hold onto the ideas that you form as a child. This book was rooted in an idea that he had when he was younger, that has stayed with him ever since. He also spoke about his sporadic interest in reading, as it took a dive in his teens, only becoming a real passion again after reading Nick Hornby's High Fidelity aged nineteen. This interest in Nick Hornby led to a funny discussion about new writers often trying to ape their heroes, the lesson being to form your own style if you want to get noticed. All in all, Ford's career so far highlighted the need for hard work and jumping on available opportunities, rather than falling at the first hurdle.

David Solomons: My Brother is a Superhero

Solomons began as a script writer - previously writing for films such as 5 Children and It (2005) - believing it to be an easier avenue than novel writing. This was, he said, a foolish thought as script writing can be one of the most difficult writing forms to get right. It was only when he met and married fellow writer, Natasha Solomons that he decided to give novel writing a go.

Luke Parker was just your average comic book fan until his boring, teacher's pet, helps-old-ladies-across-the-street brother Zack got turned into a superhero. Luke can't believe the unfairness of it all—he's the one with the encyclopedic knowledge of everything from Ant-Man to Wolverine! At least he can help Zack—aka Star Guy—with all the important parts of becoming a superhero, like using his newfound powers and deciding whether or not to wear a cape.

This was also a very fast and funny read, full of puns and offhand jokes. The language is very suited to a mid-teen age range and the focus is quite an original one, with the hero happening to be the sidekick to the superhero in this story. Again, the section that Solomons chose to read is from the beginning, and the action takes it stride straight from the get go.

Asked why the authors had chosen children's lit instead of adults', Solomon quipped 'have you seen the state of the adult publishing industry?'. All joking aside, he suggested that it is much easier to take books in wild and imaginative directions when writing for a younger audience and that there are fewer limits. He also said that it's important to have a rough plan in place before writing as it will help to guide the characters throughout. As obvious as this sounds, it is a good habit to get into early.

Pounder also started her career as a journalist and still works for the Financial Times. She used a work bonus to take a writing course at Faber Academy (a very esteemed course) which finally encouraged her to take the plunge and write her debut novel. Witch Wars also happens to be an idea that was formed in her childhood.

When Fran the Fabulous Fairy turns up in Tiga Whicabim's shed to tell her she's a witch, Tiga doesn't believe her. Or at least not until Fran points out that TIGA WHICABIM is actually an anagram of I AM A BIG WITCH and magics her away down the drainpipes to compete in Witch Wars – the competition to crown the next Top Witch of Ritzy City.

This is also a fast-paced book with eccentric characters and speedy dialogue. Mixed with illustrations by Laura Ellen Anderson, the book has a kooky feel to it that harks back to classics such as The Worst Witch.

Pounder also impressed the importance of holding onto ideas from childhood, and said it is a good idea to carry a notepad around to jot any writing ideas down that come up, even if they don't seem overly important at the time. She also said that it is helpful to imagine your characters speaking to each other before you begin writing their scenes, so that you have developed a nuanced understanding of how they would communicate. This will stop their conversations from seeming too obvious or wooden.

This was a one off event at Bath Children's Literature Festival. The festival runs until Sunday 4th October, visit here for a full schedule of events. 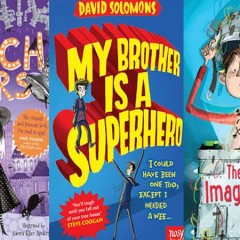