A brand-new multimedia journey from the award-winning ChewBoy Productions.

A play about those childhood dreams.

Baz is the resident DJ of Brigdale Primary. Next week, it's the Year 6 Leavers Disco: the biggest gig of the year. With a mighty setlist of early-noughties bangers cued up, Baz is raring to go for the event of a lifetime. That is, until their old school rival barges his way back onto the scene, forcing Baz to recollect the things he'd kept buried for years, and face up to moments in his past that will define his future…

Join Baz in the multimedia, solo adventure of the century: DJ BAZZER’s YEAR 6 DISCO, exploring childhood dreams that never wake up, the things that keep you up at night and the toxicity of comparing ourselves to others. As Baz traverses through the nostalgic sounds of his childhood, he asks the audience to consider the hopes they had for growing up, and what it means to be alive through a journey of Magaluf rooftop raves, hospital wards and the glow stick laden school halls of years gone by.

ChewBoy Productions are an award-winning multi-arts production company specialising in theatre, film, digital and working with new voices. Established in 2018, they have produced 9 projects to date, including their critically acclaimed debut production EUAN which enjoyed a UK Tour in 2019 to venues such as Chichester Festival Theatre and Rose Theatre Kingston. The company creates surrealist work which gives you something to chew on long after you’ve experienced it; with each project being unique in utilising the skills of creatives from different backgrounds and specialities. ChewBoy are 2021 associates of the Lion and Unicorn Theatre and digital residents of Living Records Festival. The company for DJ Baz sees a plethora of newcomers to ChewBoy’s creative team, offering a fresh insight into the creative process, treating sound design as a second character.

★★★★★“ A laugh-out-loud surreal comedy...with layers of nuance and thought-provoking moments which leave the audience questioning who they are.” | London Theatre 1

★★★★ “The sort of theatre you can fall in love with.” | View from the Outside

★★★★★ | “ChewBoy Productions are a theatrical force to be reckoned with, and it will be fascinating to see their undoubted talent develop in the near future.” | The Review Chap

★★★★ | "Brave, baffling and brilliant to boot. I wish more companies had the confidence to take this kind of risk because, as EUAN proves, it pays off.” | Broadway Baby 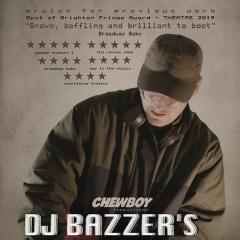 A brand-new multimedia journey from the award-winning ChewBoy Productions.