… and the predators are now the prey?

Abigail and Emma weave a cautionary fairy tale for our time, celebrating the wisdom of the witch, unpacking the notion of predator and conjuring a world of coven-ready weird sisters.

Enter The Dragons encouraged older women to challenge stereotypical representations of ageing, Witch Hunt takes the concept further by identifying and celebrating the wisdom and power held by older women. It’s a ritualistic voodoo brouhaha designed to enchant and hex the pricks and predators. Imagine Vic and Bob doing The Crucible.

Armed with their ‘wiccan’ sense of humour A&E Comedy use bouffon techniques, puppetry and magic to ask “Can we use comedy and witchcraft to take down the patriarchy?” Oh yes we can!

‘As two women in their fifties we’re using comedy to look at contemporary gender politics and the ways in which women’s voices are repressed through entrenched social misogyny’ said Abigail, ‘We want to celebrate older women’s wisdom and power’ added Emma. See the trailer herehttps://vimeo.com/340190114

Described as ‘Gleefully improper fun’ by Brian Logan in The Guardian, Enter The Dragons won Best Show at Brighton Fringe 2017 and was a Guardian top pick at Edinburgh Fringe 2018.

Abigail has worked with companies including Trestle, Compagnie Philippe Gaulier, Theatre de Complicité and Peepolykus. Emma is a freelance writer, director and puppeteer, renowned for her work with young audiences, most recently creating shows for Moomin, Roald Dahl estate and comedian Jo Neary. Their sitcom What Next, directed by Cal McCrystal, won the prestigious Sitcom Mission Connection and was optioned by Hat Trick Productions.

Cal McCrystal is known for comedy direction on West End and Broadway hit One Man Two Guvnors and was credited with managing to make James Corden funny.He has created international touring shows for Peepolykus, Spymonkey, The Mighty Boosh and others and directed the international tour of An Evening With Noel Fielding. He regularly works as comedy consultant on major movies including Amazing Spider-Man 2, The World’s End, Man Up, The Nice Guys, The Dictator, Paddington & Paddington 2. He also wrote Circus Abyssinia’s worldwide 5 star smash Ethiopian Dreams. 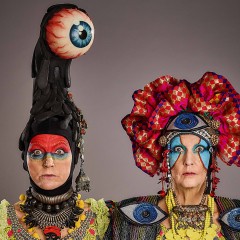