Join us 1 February at 1 PM for Instaviews with Bristol-based band, Bitter Kisses.

Bristol-based heavy-pop group Bitter Kisses will join us for Instaviews on Wednesday 1 February at 1 PM. The band are releasing their debut single Pr*y on Friday 3 February, so join is to hear about what you can expect from their music.

Recorded with Josh Gallop (Mother Vulture, Phoxjaw) and mixed and mastered by Tom Cory (Novatines, Superlove), Pr*y (Prey) is explosive and heavy yet infectiously catchy in equal measure.
Describing themselves as "Pop music you can beat your friends up to", their upcoming debut single, already championed by BBC Radio One, more than lives up to this hype.
Reflecting on the inspiration behind the single the band state,

“Pr*y was partially inspired by a fever dream in which Lady Gaga collaborated with Queens of the Stone Age to produce a new Earth Wind And Fire song."

Alongside the single comes the track's music video, inspired by David Lynch-style psychedelic and surrealist films. The entire set and props included were created by the band themselves in true DIY fashion. 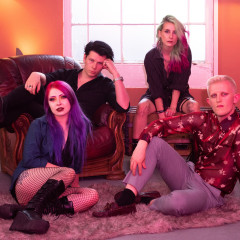 Join us 1 February at 1 PM for Instaviews with Bristol-based band, Bitter Kisses.