Now forty, with a string of disappointing relationships behind her and her own grown-up daughter about to leave home, a chance re-watching of He-Man reignites the spark of Rosy’s lust, setting her off on a mission to replenish her sexual power. But can tortured beefcake really be the key to her salvation? Or does a more uncomfortable sexual truth lurk, waiting to be reckoned with?

Join Rosy in this intelligent, provocative and terrifically funny real-life story, as she goes to any lengths to find out – even if that means asking Dolph Lundgren and Arnold Schwarzenegger themselves…

‘It’s about me getting to grips with my childhood passion for watching these incredible scenes of hyper-muscular men being abused’, says Rosy. ‘About why that dynamic felt so powerful. Musclebound takes a playful, candid and highly singular look at sexual power, female pleasure and the politics and principles of orgasm-faking.’

Rosy is forced to ask herself: what are the sexual lessons we want to pass on to our daughters – and what do we still need to learn for ourselves? Is it ever OK to objectify people?

Rosy Carrick is a writer, actor and translator. Her critically acclaimed play Passionate Machine won theawards for Best Design and Best New Playat Brighton Fringe in 2018, and The Infallibles Award for Theatrical Excellence at Edinburgh Fringe. She has co-hosted the poetry stages at Glastonbury, Latitude and Port Eliot Festivals for the last decade. Her debut poetry collection Chokey was published in 2018 and its follow-up, 26 Letters, is due for release in 2023. Rosy has a PhD on the Russian revolutionary poet Vladimir Mayakovsky. She has released two books of his work in translation, and is currently working on a third, which will be published in 2024 by The 87 Press. www.rosycarrick.com

Musclebound is directed by Fringe First winner Katie Bonna. Katie won the Most Promising New Playwright award at the 2018 Off West End Awards (for All The Things I Lied About). In 2021, her queer comedy The Entertainment was nominated for OFF Fest’s Best Online Theatre production, and her short film IRL was nominated for Best Comedy at the Cannes Shorts Festival. Part of the prestigious BBC Comedy Writers Room course 2019/2020, Katie is currently under commission from BBC Radio 4 and RADA. 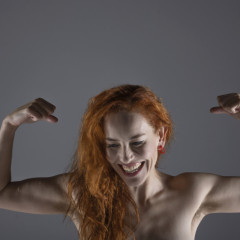