Voice MagBlogsCogX - The heat is o…

Sweta Chakraborty: “The climate crisis is changing everything”. How climate is impacting countries’ national security.

Sweta began the panel by stating, “The climate crisis is changing everything [...] climate change is a threat multiplier; it exacerbates existing conflicts and puts human, national and global security at risk”.

What is the relationship between climate and security?

Erin Sikorsky, Deputy Director of the Center for Climate and Security, explained how most countries have previously focused their security around threats from other states and countries. However, following 9/11, that focus group included non-state actors, terrorist groups and extremist organisations.

Sikorsky suggests that new measures need to be taken into account for these ‘actor-less risks’ – things which cross borders easily, aren’t managed by just one state alone and require global cooperation.

What are the threats?

“In 2020 alone, more people around the globe were forced to move within their countries due to extreme weather events than to direct conflict and violence”, - Erin Sikorsky.

She also mentioned additional risks often overlooked, such as damage to infrastructure, military infrastructure and interrupted operations due to weather.

What is the solution?

Neil Morsessti, Vice Dean (Public Policy) Faculty of Engineering Sciences at UCL also contributed to the discussion, stating, there is no security solution to climate change.

“It’s like many transboundary non-traditional threats that neither have a military origin or necessarily a military solution. There’s just greater insecurity if you don’t act, but that doesn’t excuse the security community from taking action. In this instance, they need to do it as part of a whole government holder society approach to reduce the risks posed in the community. They need to acknowledge it’s a problem, and they need to gather the information and conduct an analysis.”

Then, he suggested building capacity and resilience in most vulnerable countries, although explained that because we live in a globalised world ‘that will probably fall to the likes of non-government organisations’.

Morsessti also emphasised bringing communities together who speak a common language and sharing their ‘critically important regional expertise’ for dealing with droughts or a shortage of food-bearing crops. 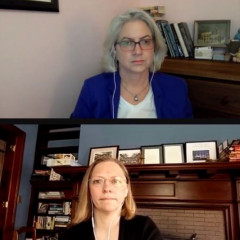 CogX - The heat is on: The greatest threat to our national security

Sweta Chakraborty: “The climate crisis is changing everything”. How climate is impacting countries’ national security.