We’ve all heard of Pac Man and Space Invaders, but where are the people that wrote the music for these iconic ancestors of modern gaming?

Before consoles, the way people mostly interacted with video-games was through arcade cabinets. These monolithic gaming machines are the cradle of video-game music, and music had been incorporated into them since their inception. The way you could go about this was to include a physical piece of traditional music storage, a compact cassette or a vinyl record, and use that to play whatever sound you wanted. This was how the music to Journey (1983) was included in its cabinet. However, getting a computer to generate the music for you avoided large, easily damaged hardware like this having to be included (and maintained) within the cabinet. This is the birth of the chiptune, which we will talk about in a later article.

Chiptunes were compact, being stored within the machine’s code rather than on physical media, and had the advantage of being able to run on-the-fly, allowing for easier synchronisation with the game itself. Whereas previously, due to the limitations of the hardware, the music in an arcade game was limited to opening musical jingles, chiptunes gave rise to the possibility of a constant musical background to a game; a possibility realised by Tomohiro Nishikado in Space Invaders (1978). So he’s our first video-game composer right? Well, problem is, the music to Space Invaders sounds like this:

Compare this to Nishikado’s closest challenger to the crown of the first video-game composer: the music to Rally-X (1980) by Toshio Kai.

As Wikipedia (that bastion of responsible research) states: Rally-X is the first game to have continuous melodic background music, and it certainly sounds more like music right? There’s a recognisable melody and a sense of logical musical progression, even if it is very simple and designed to loop forever. So which of the two is it? Well that depends on what we consider “music” in a video game context, which I explore in my sister article on this subject.

But who are these two men? You might expect the creators of a whole new musical genre, one that has become an integral part of gaming — an industry now worth £3.86 Billion (more than music and video combined) — to be well documented, but we actually know rather little about the pair.

Nishikado started out making Jukeboxes for the company Taito Boueki, and he’d worked as an audio engineer before that. Little is mentioned in any biography or interview with him about any particular ambitions as a composer per se but he worked on many musical projects during his time with Taito Boueki, including Karaoke systems and music-playing robots.

Toshio Kai is even harder to pin down; we don’t even seem to know his age. He was credited as “sound and music director” on a few games, most prominently Pacman and the above-mentioned Rally-X, but that is about as much as we know.

Even here we see the beginning of a trend that would come to define video-game music; the silent toil of people making distinctly un-silent work. This is something that has only just started to change, with composers now sharing a slightly larger share of the acclaim the games they work on receive, with figures like Mick Gordon, Yoko Shimomura, and Gustavo Santaolalla receiving recognition outside of (as well as within) the games they wrote for; although even here they tend to be known more by the gaming community than the music community at large.

Which brings me to why I wanted to start this series: to shed light on some of the characters that have come to define the gaming sound-scape; to show how music within games has changed and evolved over time, both with improving technology and budgets, but also with an evolving attitude towards gaming as an industry and as a form of entertainment.

I hope you’ll join me next time, where we will look at chiptunes, and how hardware limitations create musical challenges that would come to define an entire aesthetic within the gaming world.

'Gaming’s Maestros' is a monthly column taking a deep-dive on video game music and the creatives behind it. They are released every month on the 10th, and you can find all episodes here.

This article has a sister article! Go read my deep dive On the Origin of Game Music now on my Medium blog. 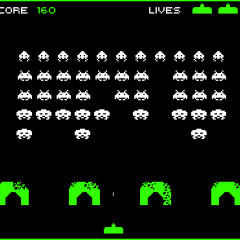 We’ve all heard of Pac Man and Space Invaders, but where are the people that wrote the music for these iconic ancestors of modern gaming?