Circulo is in the process of using an app to protect and empower women around the world and work towards a safer society where women can flourish.

Have you ever been in a situation where you feel nervous, uncomfortable, or directly at risk?

Circulo began as an initiative in Mexico City with an objective to help protect women from dangerous situations, allowing them to continue pursuing jobs that may put them at risk. In order to protect women who may work in journalism and find themselves in rural areas with a lack of mobile connectivity, Circulo aims to provide women with safety, wherever their location.

The team explained how panic buttons were controversial in Mexico City due to government involvement and therefore warranted the need for an alternative. Namely: the Circulo app.

The Circulo app is still very much in the process of development. As such, this MozFest workshop was largely based around our experiences and what may be useful to ourselves as women. Do note there were male attendees at this workshop too, and whilst the app is aimed towards women primarily, ultimately the overriding aim is to protect anyone who is at risk.

Following an introduction surrounding the premise of Circulo, we were asked to “tell our story”. Sheets of paper were handed around, with notes to encourage us to describe a real-life situation where we have felt uncomfortable, nervous for our safety or at risk.

Questions were posed such as: what was your role? What would have made you feel safer? What was your internet connectivity? If you’ve ever walked through a dimly-lit city street alone at night, you know the kind of situations we were describing.

One lady recalled a scenario when an individual persuaded her they were an Uber driver and she entered their car, when in fact they lacked the authentic verification. In such a situation, a subtle and swift method to communicate with a trusted community was necessary.

After sharing our stories with partners and discussing what would have created a safer situation in that moment, we then viewed the Circulo app prototype. By sharing what we would find useful, the team at Circulo will be able to grow their initial design. Features included being able to post rapid, regular updates on your situation, sharing your location and being able to reply to the posts of others to provide safety and community to those around you.

Circulo is a fantastic initiative with an ethically imperative objective. If you’ve ever felt at risk or in need of support, keep an eye out for the Circulo app. 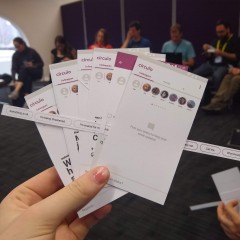 Circulo is in the process of using an app to protect and empower women around the world and work towards a safer society where women can flourish.