Getting ready for their debut record release on July 26th, brother and sister pairing The Luck are about to drop ‘Ready To Run’ an album that incorporates the duos soothing harmonies and acoustic guitar led instrumentals

Recorded and produced over in the states, ‘Ready To Run’ reflects on the siblings Max and Esmay Luck’s encounters with music icons including Paul Broucek President of music at Warner Brothers Pictures to the personal battles of a relationship breakup. Its these experiences that makes the albums subject matters remain grounded, all whilst reliving the incredible opportunities The Luck have enjoyed since their formation back in 2011. Since then the band have shot to success, performing at respected venues across the UK and US including the historically famous the Troubadour, gaining two million streams on Spotify and having air play from the likes of Countryline TV and BBC radio Sheffield.

The album features a selection of songs suitable for every emotion. For instance, track ‘If This Is Love’ reflects on the concept of having a soulmate, with its beautifully written lyrics by Esmay composed during a time of healing from heartbreak.

However, empowering and uplifting numbers ‘Lionheart’ and title track ‘Ready To Run’ are bold and courageous tracks that really showcase the siblings ability to flicker between emotions whilst retaining their roots in Country music, with the album itself inspired by musical legends including Fleetwood Mac and Tom Petty.

With the forthcoming release of ‘Ready To Run’ looming, The Luck show no signs of stopping their impressive career anytime soon. With an album launch party at Thousand Island on July 25th, and performances booked in across the UK festival circuit, the sibling duo plan on bringing their overall musical talent to the masses in new album ‘Ready To Run’.

Head here to preorder 'Ready to Run', and get ready to see a whole new side to this fresh new Pop-Americana duo. 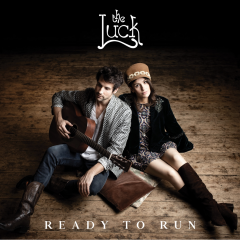 Getting ready for their debut record release on July 26th, brother and sister pairing The Luck are about to drop ‘Ready To Run’ an album that incorporates the duos soothing harmonies and acoustic guitar led instrumentals