Some reflections on the way in which music education is conceived and the many issues that they present.

There is a real problem facing modern discourse about education at the minute, namely when discussing the issue of the arts’ continued and worrying decline within secondary education. The issue can be seen in the words we use to talk about this issue; the way in which terms like “academia”, “academic subjects”, and “artistic subjects” are bandied about and used - or rather: abused - I think is indicative of much of the issues surrounding this discussion, and looking at the discussion as raised by Ruth Watson in her article on the topic prompted me to think more on the matter. This is not at all a rebuttal to Ruth’s article, and indeed I would urge you to read it, but I think it highlighted to me an issue at the heart of the discussion that I think is worth mentioning.

Right, disclaimer out the way it’s time to get to the heart of the issue. In short I think it is a matter that we no longer have a real grasp of what we mean when we talk about “academic” and “artistic” subjects. Now there is certainly a branch of discussion we could have on this which involves us putting on our waders and trudging into the postmodern hellscape of asking questions like “but what is art?”, but we will not venture there as that way madness and migraines lie. We can think of something being “academic” in that it being about study of a subject, rather than necessarily being a practice or application of that subject. In many ways, the contrast between practical and academic subjects could be seen in the same way as you might think about theoretical and experimental sciences; one is the study of how science works and another is the investigation into how science works through an application of that science.

Art is a more tricky thing to define however. This is partly because the idea of the arts as subjects are humanities, rather than sciences. Art is essentially of human creation, rather than a naturally occurring phenomenon, like physics, say. This leads to a misconception that to study an art is to practice the art, and the way in which art and drama and creative writing are taught in schools would reinforce that idea; learning through doing, trying to learn through creation of work.

However this definitely is not the only way to learn about humanity. Studying history does not require first-hand experience of events as they occurred or even digging up a piece of Saxon gold, one can equally study the sources and draw conclusions from them. Likewise for music, one can study the scores of composers and hear music via recordings and analyse and write about them without actively creating. I personally don’t think that studying arts without any creation of art yourself is a good way to learn, but the important idea here is that both the study and creation of art are important to an education in a discipline. This is one of the crucial misunderstandings surrounding the debate about art in schools is that there is a general assumption that studying the arts is simply a matter of doing arts at school, and that is to grievously miss the point.

I remember distinctly hating the token music lessons at primary school because it more or less consisted of a class of 9-year-olds being put into a room with a selection of slightly battered percussion instruments and more or less being told to knock ourselves out (a worrying thing to suggest to a class full of children with percussion mallets in their hands). Were we playing music? In the most excruciatingly pedantic interpretation of the question: yes we were. But were we learning about music? Perhaps. In some strange way amidst the pandemonium perhaps we learnt some things about those instruments: the tambourine makes different noises if you shake it instead of hitting it, the triangle doesn’t resonate if you hold onto the metal (therefore teaching us something about the principles of resonance), and no: just because you saw a guy on YouTube playing the recorder with his nose does not mean you should attempt to do so yourself. But were we being taught music? Were we studying music? No, not at all.

This is the conception of music tuition that many of the politicians and councillors involved in the issue seem to hold of secondary music education. That it’s somehow just a version of those primary school classes with students who have a slightly better grasp of how to make something good come out of the instruments: suspend triangle by string, hold beater the right way round, remove recorder from nose.

However, studying music at secondary school is an inherently academic pursuit. When learning at GCSE and A level, students are required to analyse scores, understand music history, have a comprehensive knowledge of the properties and capacities of various instruments, and gain an appreciation of music of all styles and origins. This is in addition to composition and performance, and what you learn from those other elements begin to inform the way you create music. Like anything else, understanding something better usually makes you better at doing it. This is the principle behind my choice three years ago to go to Oxford. An Oxbridge music education isn’t conservatoire for the A* crowd, nor is it the place where the people that want to learn music but not play it go, it is instead a place where you learn about Music in the way which demands a pretentious capitalisation of an uncapitalised noun. It embodies the principle of academia informing practise, which makes sense when you think about it in other contexts. A chemist would never walk into the lab and start conducting experiments without understanding the theory of what she was doing, or the principles and procedures of safe lab practices (dammit I’ve started an alkali metal fire, better throw some water on that!).

Obviously the stakes are very different here, but it illustrates the point: art is not just a thing to be done, it is also a thing to be understood and to study. I’ve been focusing on music here because it is what I know most about, but other art subjects are in the firing line within our schools. Art, drama, creative writing, all are coming under threat. Even English literature under the new syllabi is becoming more a matter of mindless word searching than it is an understanding of the great literary works in our history. “How many verbs are in this sentence” is not an exam question that should be appearing in our GCSE papers. It is the kind of question generated by an Excel spreadsheet, not by a human being with a love of literature.

I was lucky to take English when I did, looking back. My joy - and often existential horror - I felt from reading and analysing The Kite Runner did not come from the knowledge that there were 5 nouns on page 35. The pathos which more or less dripped from the pages came not from a proliferation of certain types of words. If you were to take a copy of the complete works of Shakespeare and shook it hard enough for all the words to come tumbling off the pages, and then proceeded to put all those words in little boxes with “adjective” or “transitive verb” written on them in neat Times New Roman pt11, what you are left with is not the complete works of Shakespeare, but a lot of boxes full of words that no longer mean anything, and a huge book full of nothing but blank pages.

The arts in our schools are under threat not from an education machine that does not care for the arts, but from one that doesn’t understand why the arts must be taught. Artists do not just happen, and art does not simply come into being of its own accord, like so many particles simply popping into existence through quantum mechanics. Whenever the inevitable cry goes up from the stereotype listeners of Radio 4 about the sorry state of modern pop music I feel a strong compulsion to grab them by the lapels and cry “Yes and what are you planning on doing about it?”. The music that they want to hear does not come about of its own volition but from nurture of young potential, from the encouragement of artists to learn how the people that came before them executed their craft and what they could do to both learn from that and how they can innovate from it. There is much that I personally think would have to change about the way we teach music in schools to achieve this - make analysis less about remembering facts about a piece and more about actively deconstructing it, and allow more creative freedom in the mark schemes for compositions, to name just two.

But before we can do any of that we need to get the people with the power to change things to understand that prioritising academic subjects over artistic ones is a nonsense from the start; for to call art ‘un-academic’ is akin to saying that it can’t be studied. Something that myself and young artists across the country are living proof of not being the case. 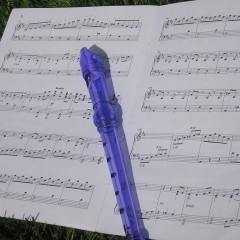 Arts Education - Re: "Academic subjects are more important than the arts"

Some reflections on the way in which music education is conceived and the many issues that they present.