Pop-Country collective The Luck have unleashed their title track Ready To Run, taken from the bands upcoming debut record release. The brother sister combination Esmay and Max Luck have journeyed across their homeland of the UK before taking their venture stateside, showcasing their Americana sounds across stages from London’s 02 Academy Islington to The Troubadour in LA. Their latest leap 'Ready To Run' relishes in the pairs musical influences of rustic rhythm guitars and strong harmony led vocals.

Meddling and mixing sonic roots taken from the Americana and Country scene, Ready To Run pays homage to The Luck’s musical background they have credited throughout the entirety of their career. Their vocal dexterity is fused artfully with the track's folk acoustic guitars and sombre percussion patterns. Ready To Run is a simplistic song, and its dreamy sounds and sumptuous harmonies come together to evoke wistful emotions for any listener.

The Luck are set to release their debut record Ready To Run on 26 July, with their album launch party at London’s Thousand Island. Following this they have a run of summer festival perfromance scheduled (River Cottage Festival, British Country Music Festival and Bude Folk Festival) where they will be showcasing their dream Country / Americana Sound) 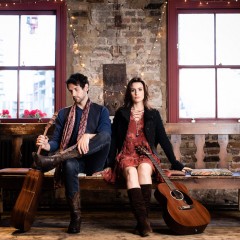