Many councils and the government have begun huge campaigns to supposedly ‘crackdown’ on the homeless and eliminate homelessness from this country. What is the human cost?

Homelessness, as I’ve argued previously, is not a choice, and cannot simply be resolved by willpower alone. It will also require compassion, and policy changes - both of which seem a hard sell currently.

Rather than blaming the individual, we could seek to address wage inequality. Better social housing and better rent controls could prevent families all over the country from falling below the poverty line. We could see more government investment in the NHS to prop up mental health services, or increase welfare standards to meet the cost of living or even create new job opportunities in the public sector. If the government was really serious about getting people back into work they could even change the legislation that requires an address in order to obtain work or health assistance in specific circumstances.

Yet, rather than make proactive movements to resolving homelessness, or even just reconsider policies that have exacerbated the problem, the government has instead decided to penalise and criminalise homeless individuals. Instead of addressing the root cause of the problem, the government has tried to simply plaster over the cracks in society, and hide the homeless. After all, out of sight, out of mind!

I’ve also argued that homeless people are being treated as scapegoats for the problems in society caused by the government and our own prejudiced attitudes. This is very relevant in my hometown Nottingham, which a few years ago had very public campaigns criticising the homeless and victim blaming within their posters and marketing, urging the public to root out homelessness by banning begging from their town-centre placement. It was suggested in these posters that being homeless was illegal and the equivalent of committing a crime, which is crazy. While everyone can agree that there is a problem, it has now become an issue of framing: Do we resolve homelessness, or hide it?

Sadly it’s not only the government asking this question but also the public. Many of those who walk around the town centres claim they don’t like seeing or even being around homeless people. Stereotypes and campaigns against homelessness ran by councils like Nottingham perpetuate the fear or repulsion felt by the public towards those who still adorn these town centres. The public become almost scared of homeless individuals, hardened to their plight and distance themselves emotionally from the human underneath. It just adds to their fear and alienation when Nottingham Council puts posters everywhere which encourages prejudice and blames homeless individuals for their own situation and worse still, brands them as criminals.

This came to a head in 2018 when many councils began to further clamp down on homelessness. Reports circulated on social media and in newspapers of councils installing spikes, bollards, and physical countermeasures to stop homeless people sleeping and resting in their usual locations, and of course, Nottingham was also part of this action. Park benches fitted with dividers to stop individuals spending a night on them. Homeless individuals were fined and imprisoned for living on the streets despite them clearly not having money. There were even reports of homeless people committing crimes just so they can spend a night in custody and gain some legal shelter. These campaigns emphasised an idea that homelessness was a crime so the individuals needed apprehending and redistributing elsewhere. It became the prerogative of councils around the country to move the homeless on to another city, or worse imprison them, so as to ‘resolve’ the problem.

To not only take a hardline stance against homelessness, but spread and increase manipulative falsehoods that already needed stamping out, is truly horrific. The positive outcome from this story is that it caused an uproar amongst a number of the Nottingham public who challenged these stereotypes and protested this approach. Eventually the posters were taken down and the councils stance reconsidered. But was the damage already done? If anything, attitudes towards homeless have worsened throughout the country and their situation becomes more desperate.

According to The Guardian, in 2018 more than 440 homeless people died due to their awful conditions. That is the largest death figure for a single year and that is only an estimate. Worse still, the trends show the figure is only increasing year-on-year.

Is it really shocking though, when you consider the actions of councils like Nottingham? The growth of resentment and outright hostility towards the homeless is frankly terrifying. Reports of homeless people getting brutally attacked, their tents set on fire, their belongings stolen and individuals murdered are becoming commonplace. We have allowed the most vulnerable in society to be further stripped of dignity and security, and while we continue to support government’s who show no compassion in their policy making, this will only continue. 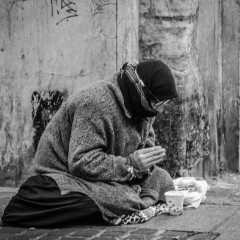 Many councils and the government have begun huge campaigns to supposedly ‘crackdown’ on the homeless and eliminate homelessness from this country. What is the human cost?