Does this jitterbug into your heart?

If you want a show which ties in karaoke, amazing mothers, Dumbo, death, meditation (yes audience participation!), actually talking to the people next to you, spirituality and of course George Michael’s ghost – you’ve got it here.

Multi-award winning Performance artist Stacy Makishi has been making her own work for 30 years. Her latest work ‘The Comforter’ kicks off the NOW 18 Festival at the Yard Theatre. After being greeted by a beaming Makishi on arrival, an open mind is the greatest asset to possess when watching the performance. ‘The Comforter’ is divided up by so many parts that I frankly found it fairly difficult to understand as an audience member. Mixing together religious prayers, rituals, meditation, anecdotes and an almost revivalist rally- it got to a point where I was unsure what I was watching anymore. Was I being preached? Was I understanding the anecdote? Was I meant to be laughing?

Other than the humour of George Michael’s ghost visiting Makishi in her dreams to instruct her to ‘Choose death’, I’m unsure what the backbone of the script was. Of course, it cannot be faulted that Makishi was energetic and beaming of life, however the script didn’t really wake me up before I go-go. Jokes were a bit haphazardly delivered and I actually felt like the drama was very forced within the script - ‘this is clearly the sad part’, ‘this is the happy part’. This does not really reflect the spontaneities of the human condition, where the audience’s subconscious should surely be roaming free and making its own discoveries. However by telling the audience too much rather than showing, it’s not really providing them with much to feel inspired by on their own.

Overall, I cannot fault Makishi’s effort put into the production. However, ‘The Comforter’ didn’t really put the boom-boom into my heart. Nonetheless, Makishi can still clearly make the sun shine brighter than Doris Day and I hope she does so soon.

What did the audience think? 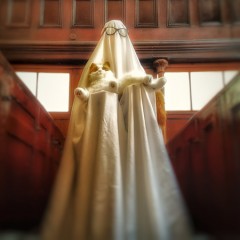 Does this jitterbug into your heart?