Tim Liardet is an established poet, having written ten collections of poetry and received 15 commendations we are told. Alongside him is upcoming poet Rebecca Perry with her debut collection. Both were shortlisted for the TS Eliot Poetry Prize and both have connections to poetry and creative writing at universities.

After being introduced each read from their work, Rebecca Perry begins with a pamphlet published in dedication to the Simpson's, for which she wrote about Milhouse. The piece is relatable and funny, despite also being deeply strange, but it works. Moving from pamphlets to her published collection Beauty/Beauty she reads a poem inspired by a book she had growing up on what happened the year she was born. The poem, is strange, engaging, dark and funny, combining everyday and ridiculously odd events, though it is clear that these events are meaningful to her.

She follows this with a poem inspired by a friend who unwillingly moved back to the Maldives, and her lines take inspiration from the emails they sent each other. The friend hates the sun, and misses the cold, wet Britain she has left, contrary to popular perceptions on the two countries. Perry's style becomes clear, being conversational and fragmented, drawing on experiences which sound deeply strange but are obviously incredibly meaningful in the right context.

Liardet follows reading from his nominated work, The World Before Snow, a collection where the poems span a narrative arc, telling what he calls an 'idiosyncratic love story', reading a few different passages we see the different characters, relationships and plot lines that emerge from his work, and become immersed in the incredibly vivid world Liardet invokes, describing the shelter of an umbrella in a sleet storm as being almost like the inside, or evoking the wonderful sensory experience of a flower shop.

Not knowing either of these writers, I was very glad that they read a few poems each to give me a feel for what they went on to talk about. The discussion after the readings explored their craft, their roles within the poetry community as well as being writers and, significantly some important issues on diversity in the poetry scene, a very current issue across many of the arts at the moment.

Although I study literature, I have had very little experience of contemporary poetry but this event was great for someone who didn't know the writers or much about the scene and after a taster from these brilliant poets, I am keen to find out more! 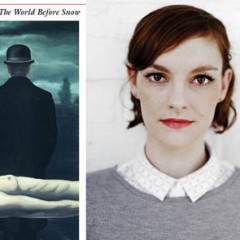