Spoiler? I love it.

After the Love On Tour, the rumors spread through all social media that Harry Styles was working on new music. On March 23, the British singer and songwriter published a 40-second long trailer announcing the release date of his third studio album: Harry’s House. Later, on April 1, Styles released As It Was, the first single of the album, and finally, the long-awaited record was released on May 20 through Columbia Records and Erskine.

Produced by Kid Harpoon, Tyler Johnson and Samuel Write, Harry's House explores a wide variety of genres, styles, scenarios and moods. Just a few days after its release, the album has received very positive feedback from the public, who seem to get along with the search for new sounds that this album proposes. Such is the case of Music For A Sushi Restaurant, the opening track. This song combines elements from different genres: it has a chorus reminiscent of disco and RnB music, with an upbeat melody on the trumpets; in the verses, the sound of the synthesizers prevails, along with a memorable melody on the vocals. Keep Driving, the 10th track on the album, has a completely different sound, closer to pop, which to a certain extent even recalls Olivia, that song from Made In The A.M, One Direction's last album (2015).

As for the lyrics, Harry's House is about the ups and downs of relationships in general, and even life sometimes. Songs like Grapejuice or Late Night Talking are somewhat reminiscent of Dua Lipa's style on her 2020 album Future Nostalgia. They describe the feeling of sharing a bottle of wine with someone special to how someone’s arrival into your life can change it completely. On the other hand, with lyrics about starting a new life away from home in Matilda brings us the bittersweet, heartbreaking side of Harry's music. Then, songs like Boyfriends or Satellite describe two sides of heartbreak and breakups.

Another feature of this album that deserves to be highlighted is the amazing vocals.

As so many of the lyrics reflect such personal lyrics, the voice can't fall behind. I think the best example is Love Of My Life (and no, it's not a Queen cover). Love Of My Life is a song about understanding the complexity of someone you care about, and losing someone who meant a lot to you. In an interview, Harry explains that this song is about England, his homeland, and how he doesn't get to spend as much time as he'd like there. One of its particularities is the incredible treatment of the vocals: the instruments decrease in their intensity and volume, so the voice can stand out above them, generating an intimate and almost painful atmosphere that closes this album.

Not an insignificant detail is the artwork chosen for each song. They feature a series of photographs taken in a casual environment, with frames that picture scenes of everyday life, like a bowl of fruit, a table ready for breakfast, or two people messing around on a terrace.

Certainly, all this contributes to the atmosphere that the album generates, which seems to allow us to peek, just a little bit, into Harry's house.

In general, the work points to retro nostalgia, the unmistakable sound of synthesizers, the groove of funk music and the most classic pop style, renewed. As a whole, the album constitutes a very personal sound search, which expands toward new styles and represents a great step in the career and musical expansion of Harry Styles.

In my opinion, Harry 's House deserves 5 stars for its innovative, original, and absolutely promising proposal.

Header Image Credit: "File:180612 Harry Styles Live On Tour in Nashville.png" by itsloutual is licensed under CC BY 3.0. 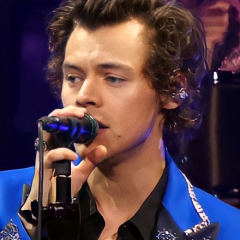 Spoiler? I love it.