Sabrina Clarke and Zena Tuitt are the founding members of Black creative studio - Niche On Demand. Hailing from a financial background the pair executive produces, funds, and distributes original content from Black creatives.

First of all, I would just like to thank you both for taking the time to have a chat with me today! Before we delve into the fantastic work the two of you are doing as part of Niche On Demand, could you tell us a little bit about your ethnic heritage and how this affects your day-to-day lives?

I’m London (Stratford) born and raised, and mine and my family’s ethnic heritage is actually Liberian. Throughout my life, I have lived in a number of places and this includes Liberia, America and The UK. My ethnic heritage and race informs everything in my day-to-day life from what I eat to cultural practices.

Interesting, given you’ve lived all over the world have you found any similarities or differences?

There are certainly different layers of culture depending on location so there will always be differences, but for the most part there are similarities in Black culture throughout the world regardless of location; shared experiences, food and music for instance.

Like Sabrina, I’m from London (Hackney) but my parents are both actually from the island of Montserrat. I’m in the US currently but I’ve worked overseas through my career in places like the Cayman Islands. In terms of the similarities and differences in culture I would agree with what was said earlier by Sabrina, there are definitely nuances but common ground too.

You’re both here not just as creatives but also as people from ethnic minority backgrounds. Growing up, what were your experiences with racism whether that be covert or overt racist experiences?

SC: First, I feel there’s an important distinction to be made between the concepts of racism and xenophobia. My experience with racism however began when I started to excel in the workplace in the finance sector, where it was certainly more covert in its nature. Niche On Demand’s aim is to create that safe space.

ZT: Yes, Niche On Demand aims to create that safe space and to tell stories from the lens of the creator’s. Typically, there hasn’t been an opportunity to tell any of these stories which is what we’re hoping to offer.

We touched on it before but you’re both actually based in different places, UK [SC] and US [ZT]. Have your experiences as people from ethnic minority backgrounds consequently been different  do you think?

ZT: I’ve only been based here for two years, during which there has been a pandemic so it’s difficult to assess. However, there are still similarities and differences.

The US’ racism is very much institutionalised and this systemic nature is similar to racism within the UK. With both, it has become normalised that certain groups are marginalised and pushed to the periphery, and neither country necessarily does a ‘better’ job at bringing them back into the fold.

An example I would use is hair, and how young children are punished for wearing their natural, afro hair.

Niche On Demand is a fantastic project and I genuinely do applaud what you are both doing. From previous interviews, Black creatives tell me about how they feel race is a hurdle for them – can you tell a bit about how you’re helping them jump these hurdles through Niche On Demand?

SC: Niche On Demand is about securing a safe space, monetary funding, ownership rights and a legacy. Currently, there are only a few seats at the table, but we aren't necessarily angling for a seat on this table – we want to tear down the building and build a new one where there’s better inclusion from the start.

Ultimately, money talks and capital is everything so that has to be the main focus of what we do here. We do however also endeavour to create social capital and use these to form meaningful connections, the former is the priority but the latter’s important too.

What I find is a useful analogy here is footballers, who have the financial resources to be experts on anything. Their money makes them attractive to people who will go out their way to create connections with them, the two are definitely linked.

The Black community definitely has social capital but not monetary capital, and it’s is a much harder path. The way they have accrued this is by being tastemakers and shaping the cultural zeitgeist through our music, fashion and so on, but if work is not being commissioned then it will simply perpetuate this cycle. Historically, many Black creatives are not empowered to negotiate and maintain their ownership rights, which if you retain can lead to greater personal compensation and also help you create your own legacy. Niche On Demand helps with this negotiation and aims for whatever it is that the artist wants to prioritise, empowering the creatives even if this means walking away from a deal to respect what their wishes are.

ZT: Niche On Demand is all about helping creatives jump hurdles they may otherwise struggle to try to jump; socio-economic issues, lack of understanding, inaccessibility of technologies, anticipating future trends and such.

Sabrina and I can use our financial backgrounds and cultural competency to help emerging creatives. This is a $2.25TN industry and yet these creatives are not given their fair slice of this very lucrative pie, hence the importance of ownership and property rights which is a big focus for myself and for Sabrina.

Especially in film, what changes would you like to see to make it more accessible to minorities?

SC: The NAACP conducted a study which found that there’s a desperate lack of Black people in leadership. A massive component of this which I can tell you about from a financial background is ‘profit and loss’ (P&L), which you need to be able to demonstrate that you can manage effectively to become any CEO. Yet, they often get the title but not the budget to manage, which prevents them from securing top roles.

ZT: Yes, ultimately it’s capital, we need to be trusted to manage our own budgets and independent development. To do this, we need to be put in positions of authority where we can prove that we are capable of this – creating teams to be invested in directly rather than through some sort of third-party conduit instead.

Niche On Demand is championing an incredibly important cause and can be found on the links below! 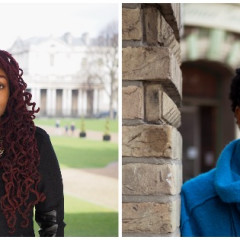 Interview with Sabrina Clarke and Zena Tuitt, Niche On Demand

Sabrina Clarke and Zena Tuitt are the founding members of Black creative studio - Niche On Demand. Hailing from a financial background the pair executive produces, funds, and distributes original content from Black creatives.