For LGBTQ+ History Month, we look at one of the greatest icons in Mixed Martial Arts (MMA) - Amanda Nunes.

Mixed Martial Arts (MMA) is a burgeoning sport and at the forefront of this is just one single promotion - The Ultimate Fighting Championship (UFC).

Dana White (UFC President) once infamously said that "women will never fight in The UFC." So, how did we get this statement from the same man who said that bringing women into the fray was "the best decision I ever made"?

Amanda Nunes is perhaps one of the reasons that he has since changed his position on this matter. Nunes has become one of the most successful fighters in the promotion’s history, ever - male or female. Not only has she been a trailblazer for women but she is openly gay.

Nunes is generally considered as the single greatest female mixed martial artist of all time in MMA. She has won belts in not just one but two weight classes simultaneously and is the first woman to do so. This makes her the third fighter in the promotion’s history to achieve this, after Conor McGregor and Daniel Cormier. However, what distinguishes her from these two is that she is the only person to defend both these belts.

Nunes is the first openly gay champion and is even married to current strawweight fighter Nina Nunes. Together, the two publicly support each other's careers and two years ago even welcomed a daughter - Reagan Ann Nunes.

She credits her success in her career to their relationship and explained when speaking to USA Today;

“It helps me to be calm because I know Nina understands. She knows everything that goes into being a fighter, so I don’t have to explain why I am doing this or that. Sometimes getting ready to fight is a difficult time, but she makes it easy for me, and I try to do the same for her.”

Nunes is, therefore, an icon in more ways than one, both for feminism and for the community of LGBTQ+.

Not only is she the most successful female fighter in a promotion that once vowed never to sign women, but she has done so without ever shying away from her sexuality and carrying the torch for the LGBTQ+ community.

Amanda Nunes is simply a trailblazer, inspiration, and icon. 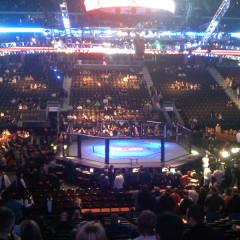 For LGBTQ+ History Month, we look at one of the greatest icons in Mixed Martial Arts (MMA) - Amanda Nunes.